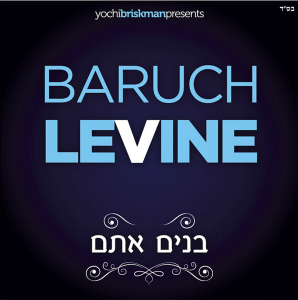 When listening to this album, there were many things that struck me, so I decided to set them all out in a full blown review.

I would like start by writing a few thoughts about the album overall, and then I’ll go through some of the songs that stick out to me. (I don’t feel the need to comment on every single song, saying things like “Oh, so this song is also just out-of the-world awesome”. If I have nothing specific to say, I’ll save you the trouble of having to read it.)

First off, just a note about the cover. Usually, when an artist chooses to create an elegant cover, the flashiness generally suffers. There’s something about this cover that defies that generalization. While the cover is extremely neat and elegant, it still sticks out in the crowd. I tried scrolling through my itunes albums, and every time, this cover catches my eye. I don’t know why it happens, but try it and you’ll see what I mean.

While producing a Baruch Levine album, I’m sure that a big focus is to create variety. Baruch, as most great artists do, has a certain style, and to keep the same arrangements and genre would seem repetitive. It seems to me that Yochi was indeed very successful in giving us a wider array of styles on this album then what we have ever seen on Baruch’s previous albums, as I’ll expound on shortly.

While my personal favorites on Baruch Levine 4 (Modim) were U’mocho and Shifchi, the biggest hit internationally was definitely Uforatzta. It was Baruch’s first song that had musical programming. Seemingly building on that success, this new album has two songs with programming, tracks 3 and 7.

One more point before I move on to individual songs. I can’t put my finger on the precise cause, but something about this album reminds me of Baruch Levine’s second album, Chasan Hatorah. I had flashbacks to different songs on that album throughout my listening to this album. Maybe some songs are similar, or perhaps the atmosphere is comparable, I honestly don’t know. It’s just a sensation that I experienced. Now on to the songs.

The first track, Vayehi Beshurun, is a great opener. It has that chant-like quality that makes the song stick in your head, but with a lot more musical substance to it. It’s nothing like the color war songs that have been commissioned to serve as opening tracks on some recent releases. It has much more sophistication. Baruch also incorporated a short staccato sound bite in English, “When we stand together then that day will finally come”, as has also become commonplace recently (as in Odeh from Yoni Z and Toda from Benny Friedman), though Baruch has already done this before it was in style, in his song Bit’chu on his third album (“have faith in Hashem, just trust in Hashem…”).

Track 4, Boee B’shalom, has an interesting twist. It seems tohave been done in a way that evokes an old fashioned feel. The word Boee is pronounced Bo’ee, not Boy’ee, as is Baruch’s standard Havarah. The choir also has that retro sound. This song would have fit perfectly on a Dveykus album.

Track 5, Yom Zeh, has the old style Shabbos Zemiros quality, but it has a real modern streak running all the way through. Whether or not this song will find its way to Shabbos tables around the world, is, as always, completely dependent on Si’atta Dishmaya(many great songs get nowhere, and many songs that we all wrote off are commonplace), but I definitely look forward to trying it by my Shabbos table.

Track 6, Umishefa. Baruch’s most successful song of all time is arguably Vezakaini off his debut album. He included this similar style song on this album, complete with a beautiful child vocalist and similar heartwarming lyrics. One caveat though is that the lyrics are not really conducive to being sung at Chuppos (they refer specifically to the Mitzva of Teffilin).

Track 9, Ashrei Mi, got me very excited. For the first time ever, Baruch Levine has a song that was arranged by Yuval Stupel. (I might be wrong, but it may in fact be the first time Yochi ever had a song arranged by him.) For those of you who are unfamiliar with Yuval, I’ll give you a general synopsis. Yuval is pretty much Avraham Fried’s unofficial producer. He helps him pick songs, and he oversees all his Israeli events. Although he’s still quite young, he has already developed a style that has proven itself to be very well liked. He’s most known for his compositions for Fried, Kach EsSheli and Kama Tov Shenifgashnu, but his arrangements have really enhanced Fried’s songs. Alei Katen Sheli, Ani Choshev Aleichem, and most recently, Yerushalayim Shebaleiv, all display his trademark flair. (Yuval can be seen at some of Fried’s recent concerts, as the band conductor. See “Live in Israel.”) Yuval did a marvelous job on this song, removing it from the almost timid genre frequently associated with Baruch’s songs, and giving it a bold yet pleasant feel. He really gave a new spin to the classic Levine atmosphere.

The final track, Kum Hit’halech, features guest vocalist Yonatan Razel. When listening to the song, it’s no surprise why Yochi chose this song for Razel, due to its unique Razel feel, but even so, the song still resonates Levine from every note. At most it can be called a Levine-Razel hybrid. But a beautiful song overall.

There was one thing missing from this album, for which I have had hopes of it perhaps appearing. On Baruch’s second album, Chasan Hatorah, the CD ended with a track entitled Baruch Levine Classics. It included five of Baruch’s songs, some of them well known and some not, which were already sung by other singers. It was a great opportunity for us to learn some of Baruch’s nicest songs that just didn’t get picked up their first time around. As each of Baruch’s subsequent albums were released, I held my breath thinking that perhaps there’ll be a Baruch Levine Classics 2. I even had my own list of songs that I thought would be perfect for such a compilation. (My list included “Ohavti” from Shea Rubenstein, “Shir Haparnasa” from Ohad 3, “Retzei” that was sung by YisroelWerdyger on Oorah’s Shmorg, “Shabbos Hayom Lashem” from Gertner 2, and my all-time Baruch Levine favorite, “Yigdal” from Shloime Kaufman’s Ahavas Tzedaka.) Alas, it has not come to fruition. Maybe next time. Maybe, just maybe, it’ll be next time.
It goes without saying that all the opinions expressed here are solely those of myself. You disagree? Hit the comments or send me your thoughts. You can reach me at YitzySternSi@gmail.com .