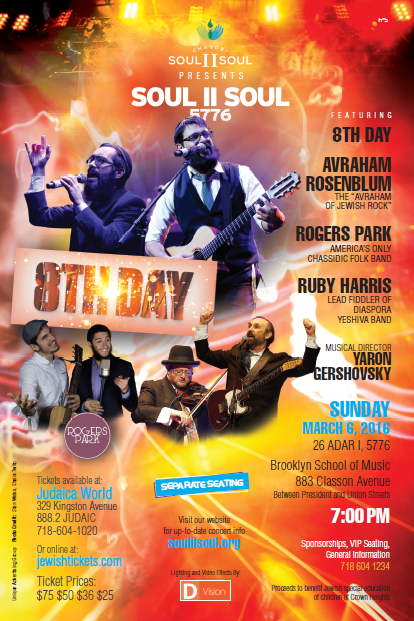 3 Jewish musical acts from different genres will share the stage at this year’s Soul to Soul concert, uniting decades of Jewish song.

The upcoming Soul to Soul concert will take place on Sunday, March 6 – 26 Adar I at the Brooklyn School of Music.

This year’s show will have the unique twist of three generations of Jewish rock bands, each of whom brought an innovative new sound to Jewish music of their time.

The concert will star the wildly popular 8th Day band, who pioneered the use of cutting edge lyrics and melodies to express deep Chassidic teachings. Co-founded by brothers Shmuel and Bentzi Marcus, 8th Day is one the most sought after acts today.
They have played hundreds of sold out concerts across the globe, touring in Australia, Europe, Israel, Hong Kong, South Africa, Canada, and all over the United States. Their hit music video for “Ya’alili” has over 3 million views on YouTube. They followed that up with more fan favorites like “All You Got”, “Hooleh!” and “Celebrate.”
8th Day’s fresh and unique sound is complemented by their poetic lyrics and spirited vocal harmonies. What started as a fun family project, has now become a global phenomenon as their fan base continues to grow all over the world.

The show will also star Avraham Rosenblum, one of the original founding members of the Diaspora Yeshiva Band – the first “Chassidic Rock” band. The band fused word of Torah and Tefilah and rock music to touch a whole generation.
Avraham Rosenblum is The ‘Avraham’ of Jewish Rock. An originator and pioneer of ‘Jewish New Music,’ his name is synonymous with the legendary Diaspora Yeshiva Band.
A tireless, inspiring entertainer, Avraham Rosenblum’s international reputation is built on his award-winning, Torah-infused compositions, strong vocal performances, and masterful guitar skills.

The show will also star Rogers Park, known as America’s only Chassidic Folk Band, an award-winning duo out of Chicago, Illinois, featuring Yosef Peysin and Mordy Kurtz.
Their performance is a heartwarming and uplifting experience that weaves together original songs, hilarious parodies, and a healthy dose of mystical Hassidic Niggunim. This combination of music and masterful storytelling has enthralled audiences and gathered rave reviews around the world.
Their debut album is on the way, and the title track of the album, “The Maggid” says everything you would want to know about this talented new band out of Chicago and its fresh yet classic folk sound.
In Europe there would be individuals who would go from town to town as storytellers, bringing tales of light and hope to local villagers in hard to reach places. Rogers Park brings this age-old tradition into our modern world and tells these stories and shares these lessons through song and music.

Ruby Harris, a legendary performer who crosses the borders of several musical galaxies, will be joining Avraham and Rogers Park on the Soul II Soul stage. Ruby, now a collaborator with Rogers Park on their new CD, and a member of the Diaspora Yeshiva Band, has played Carnegie Hall, Lincoln Center, Metropolitan Opera House and everywhere else with MBD, Avraham Fried, Rabbi Shlomo Carlebach, Lipa, Simcha Leiner, Shlomo Katz, Himmelman, Chaim David, Moshav and many others. Rock, Blues, Country, Bluegrass, Jazz and all other styles of music can be heard in every note of his guitar, mandolin, and violin.