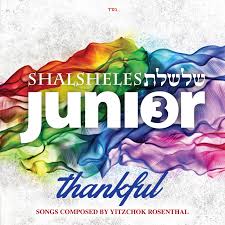 As one of the most popular and beloved groups in Jewish music, Shalsheles and Shalsheles Junior have made their mark on the Jewish music scene, and they’re here to stay.

Their current release is the third in the Junior series. Accomplished soloists have lent their voices to previous albums, and this album is no exception. An equally talented group consisting of three vocalists, Ari Ettinger, Moshe Rubin and Michael Weingarten (a Miami alum),is featured on ‘Thankful’. Their voices are sweet and pleasant. It might be just me, but it sounds like they’ve incorporated more choir parts on this album, as opposed to only soloists.

1) Chai-
The album starts off with a great techno track. Interestingly enough, the song goes straight into the bridge as opposed to the high or low. The verse is a combination of a few different pesukim, highlighting the ‘Am Yisroel Chai’ that defines us.

From one fast song into another! ‘Thankful’ is a 3-part english songs with lyrics describing our feelings of confidence in who we are, and gratefulness for everything in our lives. The intro features violins in sync with clapping hands.

The first slow song on the album, Kivisi is a nice ballad with some beautiful harmonies throughout. A flute alternates with an electric guitar for the interlude.

4) Uzi-
‘Uzi’ is an awesome, pumping, very current DJ track. The intro is a mix of DJ and some guitar. I’m not really one for electronic music but in this case the music is not overpowering and the vocals are great.

5)Elokai-
What a beautiful song! I have yet to come across an Elokai that hasn’t struck a chord. This is not your regular 2 or 3 part song. It reminds me of Baruch Levine’s ‘Elokai’ where the low, mid and high parts are sung consecutively. Listen the the word ‘Neshamos’ in the chorus. The way it’s sung is just so musical and unique. The third time around, the high part switches to english words, which adds an extra dimension of understanding to the song.

6) Ten Li Yad-
Does the song name sound Israeli? Well, this song features the Kinderlach! The concept of having two groups singing in their own languages is brilliant. The low and high parts are a give and take between both groups; SJ singing in English, and the Kinderlach in Ivrit. The theme of the song is the bond between all Yidden even when we’re far apart. In this case, literally, an ocean apart.

7) Tov Lehodos-
The track starts off with strings and acoustic guitar. It has the vibe of a Shabbos song (which it sorta is). It’s a very relaxing 3-beat song. The ‘Ei tarara ei tarara’ halfway through adds some chassidish, ’round-the-table flavor. The drums that kick in toward the end rock up the song a bit for a finale with flair.

8) Al Hanisim-
This song was the appetizer to the album, released as a single for for Chanukah. The acoustic guitar intro reminds me of a Journeys song. (Can’t remember which one).

9) Veshomru or Veshomree-
Huh? Two song names? Yep. (Just kidding. That’s just me. The song is listed as Veshomru on the album.) Another collaboration! This time with the incredible Yedidim junior and adult choirs. Yedidim has actually collaborated with Shalsheles on previous projects as well. The song is sung in two different havarahs as an interesting twist. For the second time around, the chassidishe kids take over the rein, singing both the high and low parts and featuring their own soloist. It’s a very heartwarming niggun with gorgeous harmonies.

10) Yerushalayim-
Very appropriate finale. The heavy DJ track is pumping, albeit a bit typical. The intro reminds me of some of Lipa’s material.

Conclusion: Beautiful album with stunning vocals and harmonies. As expected.