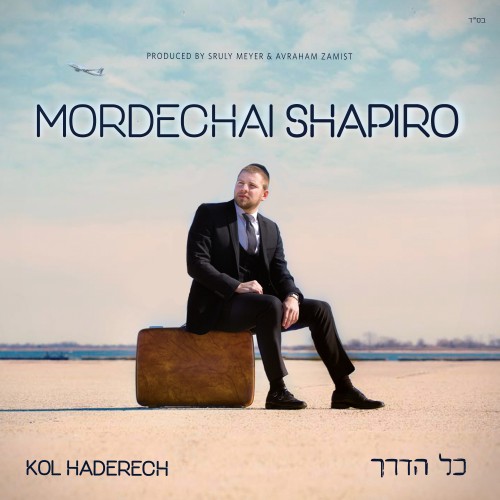 Mordechai Shapiro, 26, has just finished recording his debut album, Kol Haderech, due in stores March 14th, 2016. The album featuring 10 original songs has been in production for the last year. Growing up in Monsey, NY, and a former member of the Miami Boys Choir (‘97-’03), Mordechai has long been passionate about music. Mordechai was also featured in a famous duet singing Racheim with Yaakov Shwekey at Miami 25, which has over 2 million views on youtube.

After getting married, Mordechai moved to Eretz Yisroel and lived there for 3 years. He started by singing at Simchas occasionally, but ultimately decided to pursue a more active role in the industry. After moving back to New York, Mordechai quickly became a well known name on the wedding scene, singing with many of the popular orchestras in Jewish Music.
As Mordechai built up his name for two years, several members of the wedding industry reached out to Avraham Zamist and Sruly Meyer, producers, to consider working with Mordechai on his album.

“I had just finished Kol Haneshama Sheli, Benny Friedman’s latest Album, and in the middle of Dovid Gabay’s new album. I didn’t really consider working with Mordechai at first,” says Sruly Meyer. It wasn’t until Avraham Zamist suggested working with Mordechai as well that they sat down to discuss a plan of action. “We had a series of long conversations about music, past, present and future; it became clear that Mordechai was looking to do something big”, and that is what they did.

After a long process of sitting with composers, the three picked 10 songs that they felt spoke most to Mordechai as an artist and then sent them into production. They selected four songs from Yitzy Waldner, who calls Mordechai “a breath of fresh air”, and says “he can do things with his voice that no one else in the business can do!” Waldner’s four compositions included, “Mi KaHashem, Ivdu, Hayom and the title track, Kol Haderech.

The title track Kol Haderech features original words by Miriam Israeli (who also wrote Yesh Tikvah). The song speaks about the bond between the Yidden and Hashem. No matter what troubles we’ve been through as a nation or as an individual, we never forgot about Hashem. We hope and pray that he too will always watch over and protect us.
The album features two striking ballads from Baruch Levine, including Ki Malachov and Shir Hamaalos. The idea of Shir Hamaalos was inspired from a letter written after two terrible tragedies took two young fathers from their families. In the song’s lyrics “Hayinu Kecholmim” we look forward to the day when Moshiach will arrive, that we will wake up from the “dream” of this long Golus.

Elie Schwab, another composer known for smart lyrics with great messages, contributed Schar Mitzvah, (with music by Ian Freitor) and Chizku (with music by Udi Damari), to the album. Chizku, say’s Elie Schwab “was inspired by Bibi Netanyahu’s citation of this posuk from Parshas Devarim in front of the U.S. Congress. The Jewish nation is about enter Eretz Yisroel, and they look to Moshe to lead them there. “Lo Uchal Od Latzet v’lavoh, Moshe says, I can no longer be your leader as my time has come. Don’t fear, it was Hashem who has carried you until now, and He who will continue to carry you. Be strong! Chizku Ve’imtzu!”

The album was completed by additional songs from Boruch Sholom Blesofsky (Umeloch, with music by Ian Freitor) and a song composed by Mordechai, Lo Alecha, with music arranged by producer, Avraham Zamist. This isn’t Mordechai’s first song, you can find his hit Ani Maamin on youtube, which has over 160,000 hits.

You can pre-order here: https://mostlymusic.com/products/mordechai-shapiro-kol-haderech