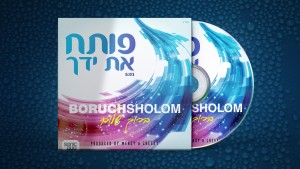 One year ago Jewish music fans were introduced to the talent that is Boruch Sholom, with the release of his debut album Bishvili, which was produced by the prince of Jewish music, Yeedle. Since then, simchos everywhere have been rocked by songs like Lo Yemalet and Shuva, and have been serenaded by slow soul stirring songs like Tefilah L’moshe and Hisnari.

Recently, a dear friend of Boruch Sholom was pouring out his heart to him, saying how hard it is to make a living today with all the expenses one has for themselves and their children. The words Poseach Es Yodecho popped into Boruch Sholom’s head, and that was the beginning of this amazing new song. This song should be a chizuk to all who need it and may we all be zoche to get what we need in life, Umasbiah Lechol Chai Ratzon.

Poseach Es Yodecho was written and performed by Boruch Sholom with arrangements and production by Mendy Hershkowitz and Chesky Breuer – SonicDuo.