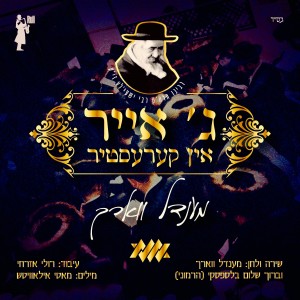 Known throughout his lifetime for performing miracles on behalf of the many Eastern European Jews who came to seek his counsel, those who flocked to the home of Reb Yeshaya Shteiner in the Hungarian town of Kerestir were warmly received and treated to a hot meal. Reb Shayala Kerestir, as he was affectionately known to all, gave brachos to thousands of chasidim and other followers. He often noted that his ability to perform miracles stemmed from his focus on loving each and every Jew as he loved himself.

91 years after his death, Reb Shayala’s home continues to serve hot meals throughout the year. Thousands come to daven at his newly restored ohel, both throughout the year and on his yahrtzeit, gimmel Iyar, with hundreds of stories emerging annually about those who experienced immediate yeshuos after making the pilgrimage to daven by his kever. Among those who have made the trip to Kerestir is well known singer Mendy Worch who felt compelled to share his experience with the Jewish music world.

“After spending shabbos in Kerestir a few years ago I decided I needed to help spread the wonders of this great Tzadik more commonly referred to as the mouse rebbe,” said Worch.

Kerestir is that rare Yiddish song that is universally understood even by those who aren’t fluent in the language, enabling Worch to share the story of Reb Shayala with a global audience in a song that captures the heartfelt depth and emotion of the beloved Chasidic Rebbe. Jointly composed by Worch and Boruch Sholom Belsofsky, with lyrics by Mutty Ilowitz and arranged by Ruli Ezrachi , Kerestir is instantly familiar and touches the neshama in a unique way.

Kerestir is a follow up to Worch’s debut hit single Bunim which will both be featured on Worch’s highly anticipated debut album scheduled for a summer 2016 release.