The summer is here and with it comes the hottest project in the past decade:
Ahreleh!
After a nerve-wracking wait full of expectations he is finally exploding on to the scene with his own album: Ahreleh Samet in his debut album!
For close to twenty years he has been in the world of Jewish music, appearing here and there in various different projects, sometimes as a guest and sometimes as the soloist. However, a proper and real album where he is fully involved in its entire production was always just a dream for him. Through heavy teamwork with conductor Naftuli Moshe Schnitzler over the course of many years, the project took on a shape and body, and now, Ahreleh’s new album is coming to a close. Many parts of the album have already taken on as major hits while they were still just being recorded, and what is expected is that this will be a rich and promising album that has not been heard for a very long time.
The list of composers involved in this album includes the Skolener Rebbe. His song, which opens the album, touches Ahreleh deeply in his heart. The rest of the list is R’ Pinky Webber, R’ Meir Adler, R’ Lipa Schmeltzer, R’ Yanky Daskal, R’ Meshulem Greenberger, R’ Motty Illowicz, R’ Hillel Paley with R’ Shimshi Neiman, and R’ Hershy Rottenberg.
“I know that there are artists who look specifically for big and popular names, but this time it went completely the opposite way,” Samet said. “The songs are what they wrote and gave me direction. When we saw a beautiful composition we simply strengthened it. It was my fortune that the album also happens to be from some of the top line composers in the business.”
The album was also arranged by some of the top arrangers as well, including Moshe Laufer, Meir Adler, Naftuli Moshe Schnitzler, and Yoely Dyckman.
The work on the album took a good number of years, during which many new techniques and methods of music production were developed and discovered. The song Lamah-Ayeh has already turned into a standard at many events by many different singers.
The thing Ahreleh is most proud of is that he was able to create a modern sounding album without any digital help. “Everything here is authentic, without any electronic sounds. Naftuli Moshe Schnitzler was very careful to maintain the authenticity and not to bow to trends. I apparently am among the last who holds onto having 100% live instruments, but I believe that anybody who hears this will be impressed that we didn’t try cutting corners and produced something really spectacular and up to date despite this.”
The new album “Ahreleh” has 12 compositions, and each one is a hit unto itself. Multiple choirs participated in giving their vocals to this, including the Malchus, Yedidim, Shira, and Neranena choirs. The children’s choir conducted by Yossi Glick also participated. Many other important singers took part in the vocal arrangements and some even spent many hours in the studio to give advice and input towards the album success, including Yeedle Werdyger who accompanied the production the whole way, giving of his talent and his time. Eli Shafri worked around the clock to “cross seas and lands in order to synchronize between the studios and the artists.”
The incredible sound was mixed by Eli Lishinsky, who infused the music on the album with depth and warmth, and carefully paid attention to every sound and effect until the result was perfect and you would be impressed by it from the first track.
This is truly an authentic Chassidic album, but nonetheless it is full of rhythm and adrenaline. It is music on a different level, colorful and refreshing compositions and it seems that Ahreleh is sure to conquer the Chassidic music market in Israel and throughout the world and be with us for a long long time.
Enjoy! 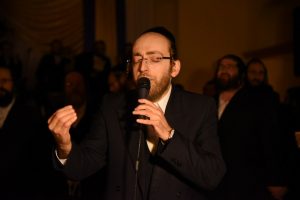