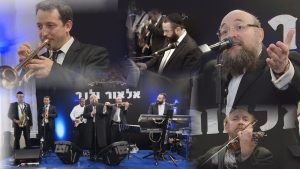 For years he has been performing at major events and productions in Israel, London and around the world. But he has yet to release a single, an album or an official clip of his own.

Right before the holidays of Sukkot, Avromi Rosenbaum was videoed while performing the Yiddish musical “A Sheinem Chulem” by Yossi Green, expressing every word in the story behind the song – and creating a new masterpiece of everyone’s favourite song.

watch and enjoy it too!