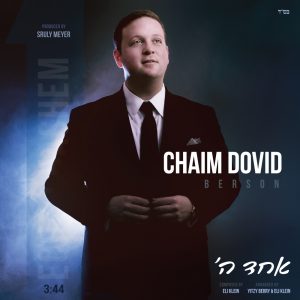 This might not be the first time many of you will be hearing of Chaim Dovid Berson, but for those that haven’t yet, it’s time to meet him! Chaim Dovid was born and raised in Yerushalayim, and is the chief cantor of the prestigious Manhattan Jewish Center. His melodious, lyrical tenor voice, his deep knowledge in music and T’filah as well his personal charisma, make Chaim Dovid Berson unique in his craft and much sought after as a chazzan and popular singer. Chaim Dovid has performed at music festivals throughout Europe, Israel and North America and led missions to Poland, teaching and inspiring visitors of all ages to connect to their Jewish roots and learn about the life and destruction of European Jewry.

Chaim David is currently working on completing his debut album, featuring original songs with producer Sruly Meyer. Sruly has worked with several of today’s top artists including Benny Friedman, and the two are hard at work to complete the album in time for a Summer release. In the meantime Chaim Dovid and Sruly wanted to release a taste of what to expect on the album, with this upbeat dance track, Echod Hashem, composed by Eli Klein and arranged by the super duo of Eli Klein and Yitzy Berry.

The song is available to download on MostlyMusic and Nigun Music and will be available on itunes and all streaming platforms this week! We hope you will enjoy it, and share it with your friends.