Eytan – Do You Believe 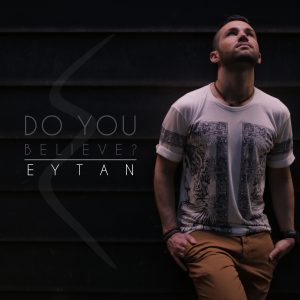 ‘Do You Believe’s’ core meaning is about spirituality. It’s an idea more people can connect with, says Eytan. ‘Do You Believe’ came to life 3-4 days before Eytan performed it at Chazaq’s annual concert, which took place at Queens College, on April 3rd. The feedback was beyond imaginable, and it was decided to release the track as a single. Combining a dance beat with inspirational lyrics, ‘Do You Believe’ is quickly becoming a smash hit amongst both religious and non-religious sectors.
Following his previous hits played on Jewish radio stations around the world (Shir Lama’alot, The Truth feat. Gad Elbaz, Bo’er Kmo Esh & L’Hamshich feat. Itzik Orlev), Eytan is looking forward to having ‘Do You Believe’ added to the list.