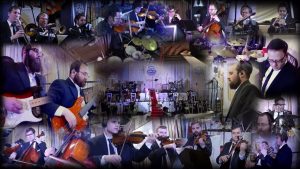 On May 28, Mosdos Bobov (45) celebrated 70 years of the Bobover Chassidus in the United States. A beautiful dinner marking the momentous occasion was held at Aviators Events Center in Brooklyn, NY.

Completely rearranged in honor of this event, watch Freilach Band perform a philharmonic version of “Lo Seivoishi” – composed by the Kedushas Tzion of Bobov Zt”l.

While it has been sung regularly in Bobov for many years, it has recently gone viral after a single of the song – dubbed “Niggun Bobov” – featuring Ah’rele Samet & Zanvil Weinberger was released by Malchus Choir (Israel).

Watch, enjoy and don’t forget to subscribe so you never miss a Freilach video!