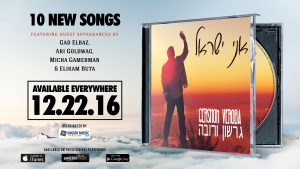 “THAT’s Gershon Veroba?” That’s what’s they’re repeating over and over after hearing his latest album “Ani Yisrael.” For a long time, Gershon has worn many hats. From composer & performer in Judáea, to performing and producing The Yess Legacy and the famous “Impressions” albums, featured on Variations, Destiny and Journeys, guest-starring in countless concerts, recording and performing side-by-side with our biggest stars and orchestras around the world. People always put Gershon in a specific “box” or category, which is why the new Ani Yisrael album is making them say, “Wow…THAT’s Gershon Veroba?” Imagine what this experience will be like for you. Gershon says, “I decided it was time to jump into an original and creative project, accepting no compromises, putting aside the good and the great, settling only for the absolute best.” After appearing on virtually every Jewish music stage, Gershon has garnered the admiration of his colleagues in the JM world. This album features his collaborations with the today’s best in the business… Israeli superstar Gad Elbaz, composer/singer Ari Goldwag, Brazilian phenomenon Micha Gamerman and Israeli Mizrachi performer Elikam Buta added not only their voices and musical creativity to create perfect fusion with their special styles. Most people have never heard this side of Gershon, even many of his die-hard fans. Ani Yisrael not only features 10 all new songs, including two of his own, other from hit-makers like Ari Goldwag and Elie Schwab, and from new talent discovery, Simcha Kranczer. Gershon’s unmistakable magic in connecting words and music shines through in this album like never before, producing fresh flavors, textures and styles with master arrangers, including Larry Gates, Leib Yaakov Rigler and the 2-man “hit machine” from Israel, Yitzy Berry and Eli Klein, from edgy small band to techno to live, lush orchestra. So, even if you think you know Gershon Veroba, you may need to guess again.

Ani Yisrael is distributed in the US by Nigun Music, in stores and available for digital download on December 22. For more on Gershon and his music, please visit http://www.veroba.net 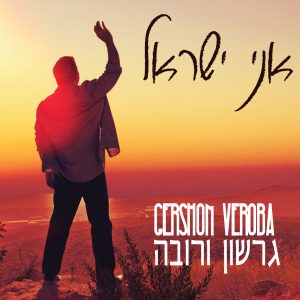 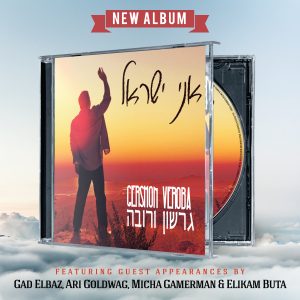 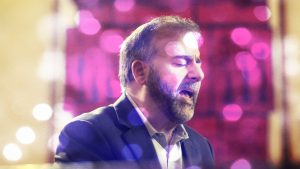