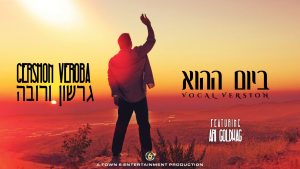 Producer/performer Gershon Veroba’s new hit album “Ani Yisrael” has been received with great excitement, followed by a PR tour on radio and TV in US and Israel. Judging from the response, Gershon continues to gather new followers and to make his long-time fans very happy with his new work.

Now Gershon has released an á capella version of “Bayom Hahu,”one of the most popular and musically rich songs on the album. Composed by new talent Simcha Kranzcer, this vocal version was produced, arranged & performed by Gershon and once again features guest vocalist Ari Goldwag.

“With all the current great á capella tracks out there performed with ‘beatboxing,’ mouth percussion and instrument imitations,” says Veroba, “I wanted this song to remain as basic and real as its message. It’s all about harmony and simplicity, with excitement that builds up and a performance that stays with you after it’s over.”

This vocal version of “Bayom Hahu” is being released with a music video spotlighting the fascinating process between Gershon and Ari Goldwag, who also composed songs on the album. This song is also available as a FREE download on Veroba.net.

Download the free single and buy the “Ani Yisrael” album at https://www.veroba.net

Subscribe to be among the first to get all of Gershon’s videos: