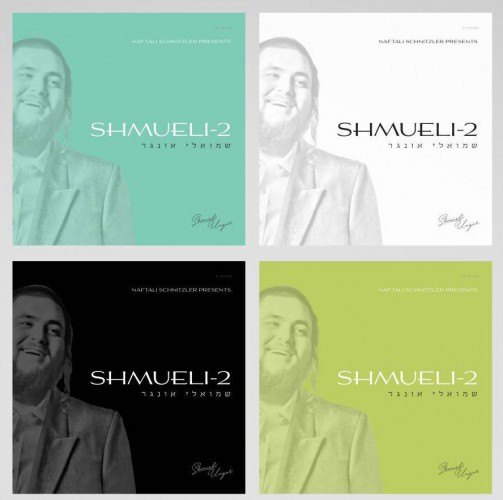 If you think there is nothing like the good old Jewish music anymore. If you think that today it’s hard to find music with an authentic Jewish feel, you should purchase Shmueli Ungar’s brand new album ‘Shmueli-2’!

Shmueli Ungar has entertained many Jewish weddings in the last few years with his powerful voice and bursting energy. Now his new album, presented by producer Naftali Schnitzler is a new album filled with high quality music.

Shmueli’s vocal control is a rare find in today’s Jewish Music options. The album can be bought in four different options, presented in four colors. The inside is, regardless of which color you choose is beautiful nonetheless.

1. Emes – a beautiful dance song. The producer, Schnitzler, wrote the energetic composition and arrangement. Vocal arrangements were done by Moshy Kraus, who is known to us from Yiddish Nachas series. The lyrics are from Shacharis, and here we have a Chazzonis hit.

2. Lulei – a Moshe Laufer masterpiece – both composed and arranged by the legendary Laufer. The arrangement is acoustic with a touch of jazz. Yoeli Dickman arranged the vocals, and this should definitely become a popular kumzitz song.

3. Ani Hoileich – this is a unique song in many ways. Pinky Weber composed this song about going to shul, and did a gorgeous job, including changes in chords (major/minor) and tempo. Moshe Laufer did his part and the arrangement is divided to Soft Rock and Ballad. Vocals arranged by Yoeli Dickman. Go for it!

4. Asher Bochar – an amazing Birchos HaTorah song. This waltz was arranged by Laufer and composed by the Chassidic legend Pinky Weber, choirs by Hershel Brisk. A tune full of Yiddishe His’oirerus.

5. Oid Yishoma – You probably heard this one already. It was released as a single a few months ago. Moshe Laufer composed and arranged this chasuna song, a chassidic Rock, which is preceded by a slow chazzonus-like piece in which Shmueli demonstrates his vocal abilities. In general this is a catchy and energetic yeshivish chasuna song.

6. Rachmono – yet another Pinky composition, this time a moving Ballad arranged by Moshe Laufer. Vocals: the new “Ba’alei HaMenagnim” choir, conducted by HaMenagnim arranger Moishe Roth. The touching lyrics are from Selichos.

7. Ata Hor’eiso – an electronic track arranged by Naftali Schnitzler and Nir Graf. Vocals by Moshy Kraus and Ilya Lishinsky (who was also in charge of the mix on this album).

8. Ma Yisroin – my favorite on Shmueli 2. Ever-touching lyrics; beautiful composition by Israeli musician Baryo Chakshur; choir by Yoeli Dickman; a mind-blowing Ballad arrangement by Laufer, and last but not least – amazing vocals by Shmueli. This one is a must!

10. S’benkt – a Chassidic classic written beautifully by Velvy Feldman, composed and arranged by Moshe Laufer. The lyrics are about waiting for Moshiach, and included is a tune sung by Jews at WWII. Vocals arranged by Hershel Brisk.

In short, This album features high-class vocals, melodies and arrangements. The arrangements are not very ‘loud’ but are full and satisfying. Shmueli invested very much in choosing the right material and musician, and he himself sounds clearer and stronger than ever.