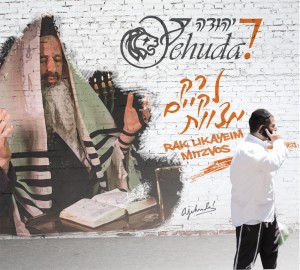 Just like the seasons, singers come and go. Some move on from singing to producing, others to different careers, but every so often a performer disappears for a number of years only to reappear with something extremely exciting for the Jewish music industry. This is one of those situations! Yehuda! (exclamation mark included) has re-entered the industry with an amazing new album.  In case you haven’t figured it out by now I will be reviewing Yehuda!’s new album “Rak Lekayim Mitzvos”. Yehuda! Throughout the years has brought us some amazing hits such as “Eftach Pi”, “Higher and Higher”, and one of the best covers of Niggun Neshoma done to-date. With all of the amazing work he’s done so far in mind, let’s jump into this album which is no different!

Obviously from reading my review you can see I am a huge fan of this album and I definitely recommend it to all! If you’re jumping on the Yehuda! Bandwagon late, you may find yourself buying the rest of his past albums after finishing listening to this one!