INSPIRE by Dovid Lowy is HERE! 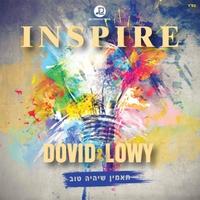 It was only two short years ago that Dovid Lowy made his first appearance on the Jewish music scene. His debut album “Ata Imadi” was an instant hit, and continues to enchant music fans worldwide. Its sweet sound coupled with duets with prolific composer Abie Rotenberg and Israeli artist Yosef Karduner, made it an instant favourite. Since then the word Lowy has continued to grow with the release of two music videos. The first being Ma Rabu, a popular song off his debut album, and the second is a song titled “Abba Sheli” off his upcoming second album.

Dovid wanted to create something really special and unique for his second album. After almost two years of work, he is proud to present “INSPIRE”. Composed and produced by Dovid himself, this fresh new sound comes with some truly original lyrics both in Hebrew and English.
After working together with big time lyricists Chayala Neuhause on the album Miracles, Dovid and Neuhause paired up again to produce 3 of the songs on this album, including the title track “Inspire”. The album also features lyrics by the world renown Miriam Israeli, as well as her daughter Sari Israeli- who both outdid themselves once again. The album features 5 different arrangers from the cream of the crop of Jewish Music, including Udi Damari, Yitzy Berry and Eli Klein, Jeff Horvitch, and Eli Woznica, as well as the up and coming RobotJox.
To top it all off, this album also features the world renowned composer, arranger and singer Aaron Razel in a brilliant composition by Dovid to end off the album with a bang. In short, Inspire is sure to make you move and be moved.

Available right now for download- ONLY HERE! be the first to get it!!http://www.cdbaby.com/cd/dovidlowy2