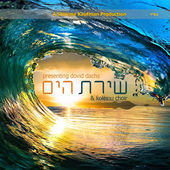 It’s a wonderful geshmak to hear young bachurim singing. They still have the innocence of a youth, but have already developed the enthusiasm of the “bucherishe yuren” (teenage years in Yeshiva). This album was produced with the support from his Rosh Yeshiva and Rebbeim all recordings were done Bein Hasdorim! This is quite evident by the inspiring mood and style of the song selection and singing.

The album was carefully produced over the period of a year by the veteran producer Shloimie Kaufman. It was arranged by the ultra talented Nochi Krohn and performed by the Shloimie Dachs Orchestra with the top of the line musicians.Eight of his friends joined to perform as a choir and they call themselves the Koleinu Choir. As mentioned above, it is a unique experience because these sound like real people singing professionally – yet with a hartzige and haimishe feeling. The music is arranged by Nochi Krohn with his unmatched heart and soul and Shloimie Kaufman.

It is comprised of 5 tracks made up of medleys.

They are as follows.

There are additional soloist in these 2 medleys – the proud father Shloimie Dachs, Shloimie Kauman, and Avi Tatel

5 – Shiras Hayam which is a Haimishe medley. This includes the famous “Viafilu Behastura” by Yoily Klein that became a smashing hit. Also Ani Maamin – Moishe Goldman, Breslover Niggun, Chabad Niggun, Ain Shum Yiush from Breslov (although I think the tune is Karlin-Stolin)

Additional solos were Shloimie Dachs and Avromi Schwebel (!) his buddy from Shalsheles Junior.

The song selection is wonderful and very geshmak. The choir is beautiful and hartzig with gorgeous harmonies. The songs in each medley are from the very best and they flow one after another like a perfect tapestry. It’s really worth it to add to your collection. Let me rephrase that. It will enhance your collection and perhaps influence you to modify it.