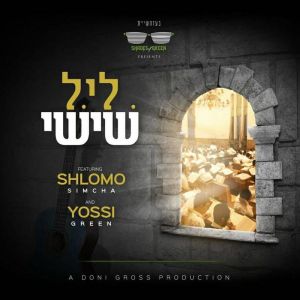 The one and only Yossi Green has once again given us a wonderful gift – a new album titled “Layl Shishi”.  This is the 5th in a series of albums called “Shades of Green”. He is joined by the “Lechtige” Shloime Simcha as the main singer and it is produced and arranged by the wonderful Doni Gross. The background vocals are by Yossi Green who does them in a way that is unmatched in the industry. He is simply the best. Any time I hear a song composed by Yossi Green, if he doesn’t do the vocals there is definitely something missing.

You can consider this a Yossi Green album or Shlomo Simcha album, or both! One thing I can say about Shlomo Simcha. He is a top level singer and any of these songs sound like he could have been the original singer for them. He doesn’t imitate Avraham Fried or Yaakov Shwekey or anyone else.

The previous “Shades of Green” was titled “Varemkeit” where he performed with Shragee Gestetner. That one was themed as a Haimishe album with all the songs sung in a Chassidishe accent. This one is themed as a “Layl Shishi” – staying up all  Thursday night to learn Torah. The 5 sets of songs are called “Sedorim” as if the night is divided into 5 shifts and topics of learning.

Following is a list of the songs that appear in the album along with the album that it was sung originally. Some of the songs I titled “Unknown” because I don’t know where they originally appeared. If anyone knows the correct original album, I would appreciate it if you let me know or write it in the comments section below.

Incidentally, “Al Eileh 1” was released about 40 years after “Al Eileh 2”.  When  Amudei Shaish volume 2 came out , the song was a tremendous hit and Yossi Green was not such a well known composer yet. Here Shloime Simcha sings it even better than it was sung by the star soloists in those days.

There is also a bonus track featuring the song “Tein Li Brocho” that also appears in the 4th seder. It is a gorgeous song and the words are from a tefilla for parnasa.

There are many reasons to love  this album:

Either because it is a collection of beautiful songs.

Or because it is a collection of beautiful Yossi Green compositions.

or because Shlomo Simcha has a stunning voice

But most of all, the selection of songs are carefully and thoughtfully connected into beautiful medleys. If you pay attention to each song musically flowing into the next and think about the meaning of the words it is tremendously inspiring. Every time I listen to it, I get a deeper appreciation of it.

In conclusion, if you are a fan of Yossi Green or Shlomo Simcha (and how can you not be?), what are you waiting for? Get it already.  It is worth every penny.