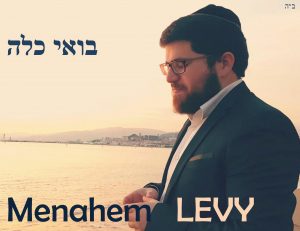 French singer Menachem Levy is becoming no stranger to JM fans around the globe. To date he has released three singles, each with its own style and flavor showing off his diversity to style and arrangements.

While finishing up his longly awaited debut album, Menachem decided to release a new single titled Boi Kalah. The melody is from a very popular song in a musical comedy in France played by Daniel Levi. While the musical comedy is a Jewish show, the song has garnered lots of attention in the secular world as well. It is a song the Levy has been requested to sing at many chuppot in the last year or so. Seeing the emotion that this particular song brings out on the chaatanim and kalot, he knew he needed to share it with the world. Presenting, “Boi Kala” as performed by Menachem Levy. The song is available for download on Mostly Music.com and other outlets.