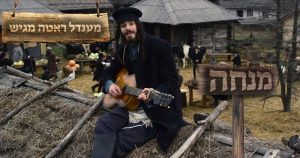 He rose to fame with his moving songs, thought-provoking articles, guitar-accompanied shiurim on the Torah of Izhbitza, and the clips he starred in… Reb Mendel Roth, son of the Shomrei Emunim rebbe, young star of the kumzitzes, and an unprecedented chassidish revolutionary. While the song was recorded in the USA with the prestigious Shira choir, the new clip, “Mincha” was filmed in Ukraine in an impressive and inspirational cinematic production. Over fifty actors participated in the clip, that gives us a glimpse into the lives of typical figures from the shtetl of three hundred years ago. The rich man and the pauper, the peddler and the buyer – all halt the tumult of daily life to daven mincha.

Reb Mendel Roth, who has already been spotted as a revolutionary with original ideas, aspires to spread Chassidus with pleasantness and charm, in a way that speaks to the younger generation, just like his great ancestor, the Baal Shem Tov, founder of Chassidus, aspired to do. And indeed, thousands of people, particularly youngsters, identify with his unique path that combines the original, authentic Chassidus of the Baal Shem Tov with a modern and up-to-date approach that wins them over.

“Mincha” is based on the idea expressed by the Besht regarding the Yid who stands in the marketplace, busy with his livelihood, who has seemingly forgotten his Creator. But when shkiya approaches he sighs, “Oy, what will be with mincha?” and runs to daven, even alone, and even without fully concentrating. The Besht explains that that sigh that emanated from deep within his heart rises straight to heaven.

Reb Mendel, as mentioned above, is a tenth generation descendant of the Baal Shem Tov, founder of Chassidus. He believes that Chassidus has declined and stagnated in the past generation, and the movement needs to be rejuvenated and revived with new content and spirit. “The time has come to return to the true sources.” Ideas like independent spiritual searching, self actualization and using your talents fully, going back to nature, seeing kedusha in the beauty of creation, in art, music and even in technology and media – while using them wisely and correctly – reflect, in his opinion, the true continuation of Chassidus that revealed the Aibishter’s light in the world in all of the reality and creations.