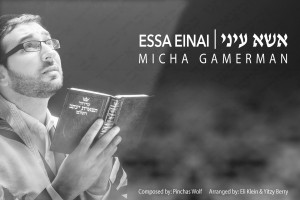 The last few years have been very challenging for the Jews of the world. One almost doesn’t want to hear the latest news for fear of hearing about tragedies. A day doesn’t go by where some terrible story goes around the news or social media. With the approaching Yom Tov of Rosh Hashanah, now more than ever, we need to pray for better times. We need to lift our eyes up to the heaven and ask Hashem to please end this terrible golus and bring us redemption.

This song Essa Einai was composed by Detroit native, Reb Pinchas Wolf, who just months ago made himself known with the release of his first album Shirei Pinchas. The nigunim on that album are already resounding around the world and making an impact on all who hear them. It was while finishing up Shirei Pinchas, that Pinchas composed this haunting melody. “I needed someone who could convey the emotion in this song, as well as perform the vocals complete with falsetto ending, something that is very hard to do. After listening to some of the more recent singers, I decided this song needed Brazilian singer, Micha Gamerman, who has not just a beautiful voice, but feeling in everything he records.”

Micha immediately contacted the talented duo from Israel, Eli Klein and Yitzy Berry, to arrange this special song. To top it all off, Micha hired top Brazilian video company VemVer Films and Productions to create a simple, yet touching video to accompany Essa Einai. The result is astounding.