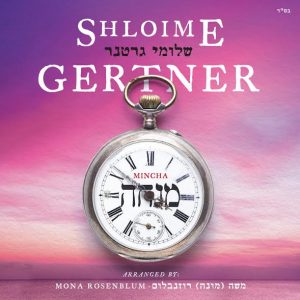 After taking a few years off of studio work, Mona and Gertner dived back into it and produced one amazingly full and vibrant album.

Shloime relates, “My relationship with Mona began about 20 years ago, when he was working on the album Ein Oid Milvado from MBD. I was a Bachur in a Yeshiva in Bnei Brak at the time, and I came with ten’s of other bochurim to audition for the choir that accompanied the album. I was chosen in the end to participate, and from then on, I dreamed of working with Mona on my own projects. About two years ago we began to work on the album Mincha, and it was a special experience for me. Mona gives his own personality into each and every song.”

Some of the greatest composers and musical personalities were brought into this project, from both Israel and America, including Yossi Green, Yonatan Razel, Yitzy Waldner, R’ Mendel Rotta, Amiran Dvir, Eli Klein, Motty Illowitz, Shimshon Neiman, Naftali Schnitzler,the Shira choir, and others.