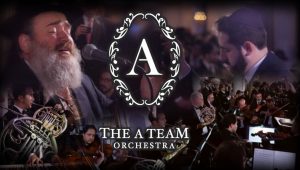 The A Team Symphony Series Presents

The A Team Presents a brand new chupa song composed by Yitzy Waldner off Shlomo Simcha’s latest studio album. ‘Ani Kan’ is the brand new album from Shlomo Simcha. One of the greatest Jewish stars to ever come out of Toronto, Shlomo returns to his roots with both Hebrew and English songs, “Ani Kan” is set to launch an exciting new phase in today’s jewish music, exclaiming, just like the album’s namesake song “Ani Kan” that the new Shlomo Simcha is here.