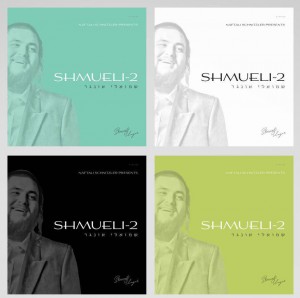 I know, I know, it’s been a long time and Im sorry about that, but I have been quite busy recently. I really did want to let you know my feelings on the excellent Fried cd and the Mordechai Shapiro one, too. I am sorry but now i am back (for now) and ready to go with this fresh new album.

I’m gonna begin with this question that has bothered me since I got the CD. Why is it called Shmueli-2? When was there a Shmueli 1? Unless there wasn’t a Shmueli 1 and it’s called 2 for a different reason? Maybe it’s really Shmueli minus 2 or this was the release of the second album and we’re getting the first one later? I’m really stumped here, please let me know why if you know.

Anyways, Shmueli Ungar is a chassidishe wedding singer who really came in big a few years ago.
If you’ve ever watched any of his videos (like this one https://www.youtube.com/watch?v=HJvV-bJasIA), then you’ve seen the energy that he puts into each and every wedding. He really gives it all he got and it’s quite incredible to see. Shmueli wanted to recreate that energy and box it and give it to all of klal yisroel so he sat down with Naftali Schnitzler and started to rock out an album. The result is Shmueli-2, full of energy, hartz and exceptional talent. Produced by Naftali Schnitzler, Shmueli-2 has a long list of established composers and arranger and really is a great listen. Let’s get started:

1. Emes- With the electronic beat and choir by Moishy Kraus, a hora begins the album. The beat on the low is similar to Omar R’ Akiva by MBD, and the high is a pumping electronic thump. This is a really good song composed by Naftali Schnitzler, plus he outdid himself with the music. Post production and mixing was done by Ilya Lishinsky. So far SO good.

2. Lulei- A bit of a country song composed and arranged by Moshe Laufer. It’s a snap your fingers type of song, like Bein Kach U’bein Kach. Choir was arranged by Yoely Dickman and is very good in the background. Shmueli shows off his incredible voice when he goes high on the high part and i really enjoyed the bridge nigun of the song.

3. Ani Hoilech- It starts off slow with words that come from the famous Gemara in Makkos. It then goes faster, and I love the electric guitar thumping away in the back of the low, like in Eye of the Tiger the famous wedding intro). The high part is slow again but then the bridge goes faster. Composed by Pinky Weber and arranged by Moshe Laufer, with choir by Yoely Dickman, it took a few listens to get into, but I do enjoy this song a lot.

4. Asher Buchar- A slow song with it’s lyrics taken from birchas hashachar. I don’t recall ever hearing these words sung in a slow song but it’s a fresh take on them and is very nice and pleasant sounding. This song was composed by Pinky as well, with the arrangements again being taken care of by Moshe Laufer. He sings this song exceptionally well, by the way.

5. Yishoma- This song in every way reminds me of a Dedi song, whom Shmueli is often compared to. This song came out as a single a few weeks ago to pump us up for the new album and it did the job. Starts off with a nice chazzanus style high and then goes into the bridge nigun. The song itself is very good as well, with a nice little shtick in the low part. It’s a pumping wedding song and has already been played at them all over the world. I love this song and it definitely sold the album to me. Composed and arranged by Moshe Laufer.

6. Rachmana- Composed by Pinky Weber, a pretty nice slow song. It’s not really my style but Shmueli hits all the right notes on the song and I can definitely hear that it’s a really good song. One of my friends told me he thinks this song is really gonna go places, but I’m not so sure. Anyways, still a nice song.

7. Atu- The best song on the album obviously came from one of the best composers on the planet: Yitzy Waldner. He only gets half credit because he was helped out by Mordechai
Brezel (V’ato Marom, Hakol Letova by Gabay, etc.). A disco with a heavy electronic beat, this also will be played at weddings worldwide. It was arranged by Naftali Schnitzler and Nir Graf and the choir was arranged by Moishy Kraus. And who’s that voice that’s clearly not Shmueli’s in this song? It’s Ilya Lishinsky’s, a great shtick, major props for that one. You should buy this album just for this song, ladies and gentlemen. It’s that good.

8. Ma Yisron- a nice slow song composed by Baryo Chakshur and arranged by Moshe Laufer, with Naftali Schnitzler adding in additional vocals. I don’t really think there’s much to this song and personally don’t care for it, but I do have friends that enjoy it a lot.

9. Veyitein Lecha- And then HaShem said! I love that shtick, and love this song. It’s exactly how I thought this album would sound. It was composed by Yossi H., who I never heard of or know, but if he’s got more of these, keep them coming! This song features the Nashville Group Musicians, and is really a great song. Definite top 3.

10. Sebenkt- I don’t understand Yiddish, which was a problem when I reviewed Motty Illowitz (whose album I hold is still the most underrated album ever) and Yisroel Adler’s albums, but as I said then, some songs are so nice that even if you don’t understand it, you still keep coming back to them. This is one of those songs. The gorgeous part is that the chorus was sung by jews in the concentration camps during WWII. Composed by Moshe Laufer and lyrics by Velvel Friedman, a really nice song.

That is the album, one that you must buy immediately if you ever enjoyed a wedding done by Shmueli Ungar or just enjoy Jewish music. Each song is longer than 4 minutes which is big considering most songs nowadays barely last 3 and a half minutes. This is one of my favorite albums of the year and I’m sure you will love it also.

I’m also gonna leaves this here, if you didn’t watch it yet, it’s an incredible story about the Holocaust that I saw on Tisha B’av on yeshiva world news called Letting Go: https://www.youtube.com/watch?v=l2gifpnJtLE