Otzar is the name of a new project that aims to preserve and publish those nigunim that have been published so far, if at all, in Reb Ben-tzion Shenker’s immediate surroundings as well as in Modzitz – most of which are not widely known to the public.

The soloist in this special project is Tzvi Weiss, a talented and successful cantor who can simply take a music sheet and sing it. He has collected 11 tunes out of hundreds of thousands from Shenker’s original music sheets – which he received from Shenker’s assistant, Rabbi Avraham Beckenrott.

The album’s special arrangements were composed by Maestro Raymond Goldstein.

Reb Ben-tzion Shenker’s tunes, Tzvi Weiss’ soulful singing, and Raymond Goldtstein’s arrangements form a unique combination that creates this wonderful “Otzar” (treasure) of special and unfamiliar nigunim that will be sung B”H in every shul and Jewish home.

Yehuda Kalman, who initiated and produced this project among others, promises its first Otzar in a series of many more to come from Reb Ben-tzion Shenker’s collection, which will be released in the future. 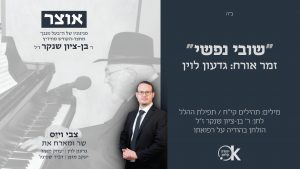