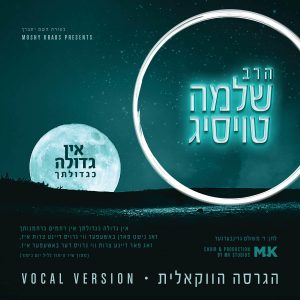 About a month ago the song Ein Gedula from R’ Shloime Taussig was released, and it has already turned into a major hit that is played nightly at weddings and events. R’ Meshulem Greenberger composed the song, and it is now released as an A Capella version for Sefirah. Moishy Kraus arranged and produced the track, and he included the vocals from the children’s choir that he manages as well.