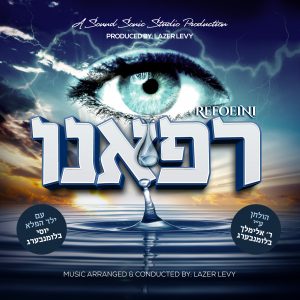 There are rare moments of difﬁcult times when a Neshomo has a deep desire to express both it’s pain and prayer in the form of a heartrending melody. Sometimes this inspiration can emanate even when the soul is hovering between the celestial and earthly spheres.
Such is the story behind our brand new musical sensation entitled Refoeini.

During a difﬁcult episode of illness, whilst in a deep coma, the soulful musical notes were formed, with our composer then awakening with the tune of Refoeini on his lips, thus effecting a wellspring of fervent hope and gratitude to Hashem.

There is no doubt the discerning listener will be nourished by the spiritual treasure trove of musical gems to be had in Refoeini, not only because of the meaningful words and warmth of the composition, but also due to the rich orchestral sentiments combined with the purity of an innocent child’s voice.