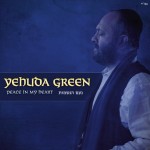 People are saying that Yehuda Green is “more Carlebach than Carlebach”. While I can’t attest to the validity of that obvious paradox, I can say that the feeling and message that R Shlomo Carlebach put into his music has carried through to Yehuda Green.

The songs themselves have a unique simplicity about them. Each song is packed full of beautifully arranged strings that fit perfectly together while Yehuda Green’s singing is packed full of genuine heart. Don’t expect any electric guitar riffs and don’t expect Yehuda Green to do fancy tricks with his voice and hit incredibly high notes. It isn’t that kind of album. I would venture to say, though, that listening to this album takes you to another place. It is some of the most spiritual music I’ve yet to hear. So if you are looking for intense, fun, high energy songs, there are lots of amazing albums out there for you. But this isn’t one of them. Instead, this album is relaxing, beautiful, and powerful in its own way.

1. Avinu Malkeinu (Composed by Yehuda Green and R Shlomo Carlebach)
The first track on the album is one of my favorites and it really proves that you don’t need electric guitars- or any type of electricity for that matter- to make danceable music. This track is full of guitar and other strings. Beautiful and uplifting. I love the harmonies around 4 minutes.

2. Birchas Hachodesh (Composed by Moditz)
After one of the fastest songs comes one of the slowest, but Yehuda Green (and the Carlebach style in general) has a way of making slow songs totally not boring, even for someone impatient like myself. This song is full of words…that is to say not a lot of musical interludes… and it makes you feel like you are in shul listening to some incredibly genuine davening.

3. Mi Sheasa (Composed by R Shlomo Carlebach)
This song goes along the same theme as the last and if you aren’t look at your music player it’s hard to notice the track change because they lead into each other very well. These are some of my favorite words from davening, and I feel like you can’t put them with just any music/tune. This beautiful composition along with Yehuda Green’s voice full of love really brings the words to life and gives the listener a feeling of aches.

4. Hashem Melech (Composed by R Shlomo Carlebach)
Some really neat fast strings start off this song and the fast tempo continues throughout. I’m not sure what it is, but I am not crazy about this song even though it has all the ingredients that I’d normally look for. Maybe the lyrics are too repetitive (Hashem Melech, Hashem Malach, Hashem yimloch l’olam vaed). That being said I love the music and this is definitely another fun singalong, dancealong, clapalong type.

5. Kah Echsof (Composed by Yehuda Green and R Shlomo Carlebach)
The first time I listened to this song I did not realize it was almost eight minutes long. It really doesn’t seem like it. It is yet another passionate song full of meaning , and even though frankly I don’t know what all the words mean in this song I feel like I get the message. Again, it sort of feels like instead of listening to an album produced for the masses, I am witnessing Yehuda Green’s personal davening.

6. Od Yishoma (Composed by Yossi Green and Yehuda Green0
What an amazing Od Yishoma! My best friend got married two weeks ago from today, and this was the hit song in the car when we were doing wedding errands. I think this is my favorite Od Yishoma now. It is incredibly catchy and full of real simcha.

7. Vechol Mi (Composed by Yehuda Green)
Another beautiful choice of lyrics for this song and again, sung with a tremendous amount of feeling. I love the strings throughout. This song is one of my favorite examples of how the instrumentals on this album are so amazing and truly seem to match the words being sung. It’s a slow song that at about the middle adds really nice harmonies.

8. Shirat Hayam (Composed by Yehuda Green)
The music in this song is also really awesome. It is a niggun, which I am not usually a big fan of, but that being said it is really upbeat and pleasant to listen to. One of the best things about niggunim is that you can easily sing along the first time around, so enjoy!

9. Im Ateh Maamin (Composed by Yehuda Green)
This is a very powerful song. The vast majority is “ay dy dys” basically. Then at around 4 minutes he sings twice the only lyrics of the song which translate to “If you believe you have the power to destroy, then you have the power to repair.” The simplicity of this song make it a bit haunting. Although when talking about the previous song I said that I want lyrics, this is definitely worthy of making an exception for. Wow is all I can say.

10. Eloka Di La (Compoed by Yehuda Green and R Shlomo Carlebach)
Filling even 30 seconds with quality music is difficult, but this song seems so full of quality. Throughout any album I sometimes get anxious for one song to end so I can hear another, but this song seemed to end too quickly because it was just very entertaining to listen to. No, it’s not a fun dancey song, but it beautiful, high quality, and truly a pleasure to listen to.

11. Lemikdashcha (Composed by Yehuda Green)
When I first heard this song, I immediately thought, “Ok, way too slow, not for me!” In fact I might’ve even skipped it the first time. Whoops. While the beginning of the song is very slow, it is beautiful and very real. But the song takes an interesting turn when at 1:50 it goes from probably the slowest song on the album to one of the fastest in such a smooth transition. The faster tempo part is what I imagine simcha music sounded like back in Europe (yeah, they definitely didn’t have twenty piece orchestras with a few electric guitars). The end of the fast part is a short niggun. This song is really interesting and unique, and I could listen to it over and over. The fast part and the slow part.

12. Holy Brothers (melody is traditional, Yiddish lyrics by Lipa Schmeltzer, English lyrics by Yehuda Green)
What a neat song! Well, most of it is in Yiddish, so I really can’t understand it. Although if I spend a few more months working in Williamsburg, that could change. The English lyrics are “Dear brother, when will I see you again/If G-d will give us life and health/We’ll see each other again”, and I’m assuming the Yiddish go along with the same theme. This is a really cool way to end the album. I love the melody and the way the tempo gradually picks up throughout the song. I love the mix of Yiddish and English and the universal language of “dadadis”.

I hope you all enjoy this album as much as I did, whether you squeeze it in before sefira starts or make it one of your first listens on the other side.