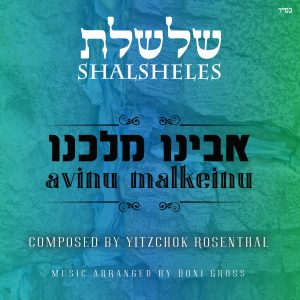 Shalsheles is back. Their last release “Shalsheles Connections” featured an all-star cast that won the hearts of music fans world wide. It also laid the groundwork for the all new full Shalsheles album that is currently in the works. Now they’re back with an all new single for Aseres Yemei Tshuva. The new single is titled “Avinu Malkeinu” and was composed by the groups composer Yitzchak Rosenthal. Avinu was arranged and produced by Doni Gross who is currently producing the new Shalsheles album. Avinu also features the sweet voices of Shalsheles Junior. The single is being released with a unique lyrical video on Youtube.

The single is available for purchase on iTunes, Google Play and MostlyMusic.com