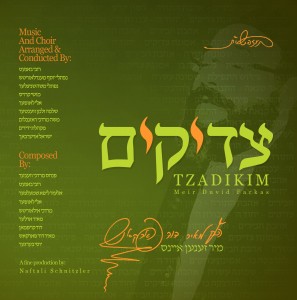 A Breslov talmud for over a decade, Meir Duvid sees his album as more than a glorified business card. To him it’s about uplifting his fellow Jews everywhere and infusing them with much-needed chizzuk through the power of song.

Meir Duvid’s weapon of choice is his powerful voice, featuring a vocal range that sings and resonates even at the highest registers. His thousands of fans have been hooked on his music since he debuted the heartwarming single, “Memale Kol Almin”, which was released less than a year ago and is now featured on his album.

The touching song was Composed by Rabbi Eliezer Shlomo Schick (Mohorosh – Breslov) together with R’ Shlomo Carlebach, now has a whole new taste,

A new song which is a rare combination of spiritual words and melodies. a team of professionals perfecting it created a beautiful production that will entertain and bring out emotions of all Yiden.

How heart-warming are the moments during “Shalosh Seudos” among Breslev Chasidim, talmudei rabainu maharu”sh when singing the stirring song of ממלא כל עלמין which was beloved by maharush Z”L, a song which its words purifies and elevates the soul.

Now the song has been refreshed with a new composition by the famous singer Harav Meir Duvid farkas, gaining a different and new melodious tone.