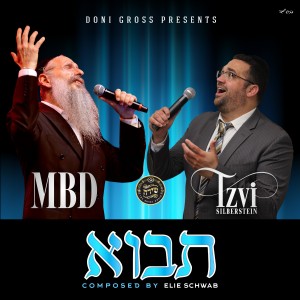 Over the years many musical stars have secured their place as legends in the Jewish music scene by creating dynasties of familiar sounds that evoke feelings and memories to hundreds of thousands of listeners. It is with great excitement that the biggest stars in Jewish music’s recent history will grace a single album, joined together with the vocal talents of new-comer and instant classic Tzvi Silberstein, presenting an electrifying new duet album. With twelve all new tracks Tzvi proves that he has not only won the respect of listeners worldwide, but also that of the Jewish music’s elite, as some of the top names in the business take their turn at the microphone to sing duets with Tzvi.

Below is a sneak peak of what this album has in store. “Tavoi” is that moving song that will be running through your head as you approach the days to Rosh Hashana. These powerful words are set to stirring music that will simultaneously inspire and delight. Joining Tzvi on this song is no other than “The King Of Jewish Music” MBD, who does absolute justice to this beautiful hartizga song. So sit back and enjoy, and while we’re waiting for the release click here to purchase your preorder copy of the album on mostlymusic.com !