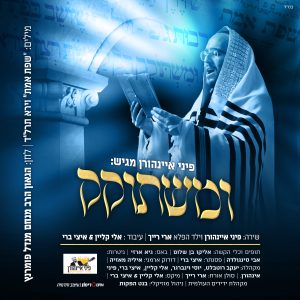 There will be a new hit sung by thousands of Chassidim in the coming days. R’ Pinny Einhorn says about this song, “Now we’ve done something new, something special, totally different. We’re not talking about a composition set to a Passuk or a saying of Chazal. Now, for the first time ever, there is a composition to Chassidish content that was drawn from the springs of knowledge in the Beis Medrash of the Sefas Emes ZTL, whose Seforim serve as the foundation stone of the Torah of Chassidus.”
The words of the song are from the Torah of the Sefas Emes, using the words that he wrote himself, and the tune that goes along with fits the message of the words perfectly, to the point where it simply comes by itself from the words of the Sefas Emes.
The Sefas Emes talks about how every person must bring his whole body close to Hashem and to be Mekadeish all of his limbs, but the perfect Tzaddikim take it one step further and are embarrassed to stand before Hashem because they might not be worthy. The way for them to come close to Hashem is through “sitting in the doorway, casting forth his body and his soul, and yearning only to do the will of his Creator.”
The Sefas Emes talks about a different path in the life of a Jew. It is not the life of plain routine, rather it is about climbing and growing and yearning for connection to Hashem, to Something bigger than himself.
This idea in Chassidus was the focus of the message of R’ Menachem Mendel Pomerantz, the head of the Mesivta Oz Vehadar, and the Rosh Kollel L’Dayanus B’Er Yisrael, at the Kever of the Sefas Emes on the “B’Darchei Ha’Chassidus” trip back early in the winter. With the inspiration of that event, as well as in anticipation of the Yahrtzeit of the Sefas Emes this year, he composed this special song. The Rav taught the song for the first time at his Purim Seudah, which quickly caught on and was sung over and over by all those who were present. Lately, we’ve heard the song being sung in more and more places, and what makes it really special is that people sing it time after time without stopping, simply yearning to do the will of Hashem.
Therefore, even though not much time has passed, the song is already performed with an original and exciting arrangement by R’ Pinny Einhorn, whose special and unique voice expresses the desires and the longing in the words of the song. He is joined by child singing sensation Ari Reich, and the Yedidim choir, for an expert arrangement by Eli Klein and Yitzy Berry. Now you too can hear the song and feel the emotion.