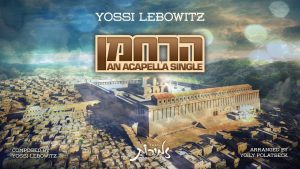 About a year ago, Jewish music fans were introduced to a unique and new sound in Jewish music. Newcomer Yossi Lebowitz released his debut single Keil N’komos, a high energy pure rock song unlike anything Jewish music has heard to date, and fans loved it. He followed it up with the release of his debut album titled K’chochvei Hashomayim. Not only were all the songs on the album composed by Yossi himself, but it also featured collabs with the best in the business including; Freilach Band, Blue Melody, Yisroel Lamm, Zemiros Group, and even famed producer Eli Gerstner. The album had every musical style out there, and was a real treat to music fans across the globe.

Now, special for Sefira, Yossi has been working on a new composition. This new song titled “Horachamon,” is a Hartzig Nigun whose lyrics talks about the rebuilding of the Beis Hamikdash. It is said every night after counting Sefira. Yossi actually composed the song during sefira a few years ago, while davening at the Kosel one Friday night. Yossi wanted to keep the song’s authenticity, since the song is being heard for the first time in Acapella. That is when he approached singer, arranger and choir master Yoily Polatseck of the Zemiros Group to help produce and arrange the track. Yoily agreed, and kept the songs arrangement as simplistic as possible, to allow for the beauty of the song to shine through on its own. The harmonious voices of Zemiros group coupled with Lebowitz’s simple yet Hartzig vocals are sure to have you singing this Nigun as we’re yearning for the Bayis Hashlishi.

May we be Zoche to the coming of Moshiach B’karov…