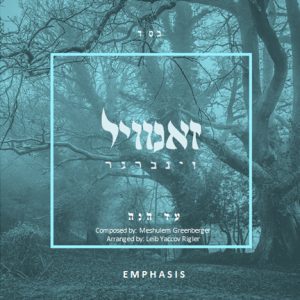 Zanvil Weinberger, one of the most sensational chassidish performers of today’s day, started out as the lead soloist of the Malchus Choir in 2014. He’s been performing at major events, dinners and simchos ever since. Now, in time for his own wedding, Zanvil releases “Ad Heina” – the very first original song to be released by Zanvil and produced by The Emphasis Team, Zanvil’s official producers. This beautiful, heart-melting melody was composed by esteemed composer Meshulem Greenberger, a close friend of Zanvil. The musical arrangement was written by the most amazing Leib Yaacov Rigler. His unique style gives “Ad Heina” the warmth a song as such deserves.