Avodas Tzedaka is a 12-track album featuring the vocals of Shloime Kaufman, as well as guest vocals by: Baruch Levine, Michoel Pruzansky, Dovid Gabay, Abie Rotenberg, A.K.A. Pella & Shalom Jacobs. With this star-studded cast, the potential for greatness is limitless. And one more really cool note: The music on this album was done by Tony Coluccio, someone who has NEVER done Jewish music before. 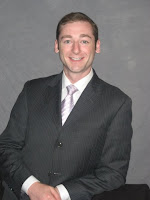 Shloime Kaufman (see pic above) debuted on the Emes albums. However, being this is his solo artist debut, he is reborn as a new singer. So many new singers have put out debut albums recently that it’s become hard to pinpoint one really solid singer from the bunch. However, with Kaufman it’s different. There’s no question about it, Kaufman has an amazing voice and his potential is through the roof. He can sing high without sounding kvetchy and low without sounding gruff. Not only that, but he displays his vocal capabilities with the variety of different styled songs throughout the album.

Kaufman nails the perfect introduction here. The music is very similar to that of “Al Tira” on Oorah’s 2009 “The Shmorg” album. That intro was amazing as well. It’s also a similar style. Short song; Fast; and lots of electric guitar. Kaufman’s voice in this song is crisp and incredibly controlled. Shloime Kaufman, where have you been!? I’ve been dreaming of vocals like yours (well not really… but he’s really good!). A typical, yet perfect addition to the song the second time around (1:22) with a single harmony. And the third time around (2:33) with a choir harmony. Perfect! This song clearly had a lot of effort put into its arrangements. Yasher Koach to those who worked so hard on it!
Shtick – (1:22 – 1:45) The single self-harmony is great and make sure to catch the “Hey!” part.

Baruch Levine. Let me be the first to say “Woohoo!!!!!! Baruch Levine!!!!” Okay, anyway, Baruch Levine’s vocals are a welcome addition to any song, especially this one, composed by him (of course!). This song, which I will bravely compare to Vizakeini, is amazing. This song will be played as chassunah dinner music; I guarantee it! Just listen for yourself. The song has Levine’s trademark eidel style written all over it. Levine sings the first part of the song, and the second part is taken over by Kaufman. It’s very hard to sing a Baruch Levine song as well as him, but Kaufman surprisingly does a fantastic job with this sure to be classic. Kaufman even sings like Levine. Listen to how he says the word “Sof” (3:20) he adds the “w” sound, making it “Soowof”. Baruch Levine adds some gorgeous background harmonies for Kaufman (3:28-3:55). Now for the real test; can Kaufman hit the keys like Levine did on the chorus? Not as good, but still terrific. Baruch Levine goes all out (4:53) and Kaufman joins in, completing the perfection of this song.
Shtick – (5:21 – 5:26) Baruch Levine’s high double harmony

This folks, is a typical Michoel Pruzansky song. Pumped beyond belief, with tons of electric vocals. Pruzansky takes the first part of this song, singing in his trademark “pumped” style. The electric at (1:06) is a bit overdone for my taste. Kaufman joins in during the chorus and you’d think he wouldn’t be able to perform such an eidel song as Yigdal and then perform this club beat Kol Yisroel. But he does, and he does it well. One thing is for sure; the pair, Pruz and Kaufman, makes for an amazing team. Listen for some craziness (2:48) and a little fake-out (3:07). Zeh Lazeh, Zeh Lazeh, Zeh Lazeh Lazeh… so addictive.
Shtick – (3:26 – 3:42) Pruz and Kaufman go all out. Make sure to listen for Kaufman’s “Gerstner” harmony (3:34 – 3:38).

This song is a bit unorthodox. It’s a slow song with a very interesting chorus. The way the chorus is “cried out” is very interesting, and new to me. It’s not my favorite style, but it’s not terrible. The middle section of the song starting with “zeh hayom” is my favorite part. Kaufman sings the song the first time around and his vocals are terrific once again. The second time around the song, Gabay enters. Although Kaufman does a good job with this song, Gabay saves it and really brings out every note for all there worth. The third time around Gabay and Kaufman switch off and harmonize with each other, which is by far the best part of the song.
Shtick– (4:53 – End) As mentioned above, the end is by far the best part of this song.

I want to start off by saying, that this album has a huge range of different types of music. This song sounds like a R’Shmuel Brazil (Regesh) composition. We’ve gone from rock to eidel to electric to slow rock, and now we have this classic yeshivish song. This is the type of song where no particular part of the song stands out any more than the rest. It’s a sweet kumzits composition. It’s easily singable, with plenty of “La la’s”.
Shtick – La la la la la… I dunno, you tell me which part is the best!

It’s no Shwekey aishes chayil, but it’s still a wonderful composition and would sound great by a chassunah. Kaufman sings this one by himself. My favorite part is during the chorus from “He Tishalel” until “Masehuh”. The music throughout the song flows beautifully and the best part about it is that it’s not overdone. I’m sure the women that this song was composed for are smiling up in shamayim. I know I’m smiling down here on earth!
Shtick – (4:44– 5:08) Beautiful, pumping music added to the song here

Woohoo!!! Another Baruch Levine composition! (Can you tell I like his songs?) Although Levine doesn’t sing on this song, Kaufman does an outstanding job. It’s got the same “happy-go-lucky” chords that Baruch Levine throws on his fast songs (Sholom, Higid etc.). Hopefully, every album has a “gishmak” styled song on it. What do I mean? There are certain happy moments in life that you remember perfectly. For instance, jumping in a pool on a hot summer day; having the last scoop of ice cream; completing a task that you worked tirelessly on. Those are defined as “gishmak” moments. This song brings back those “gishmak” memories

Habita – Composed by Yossi Miller – Performed by A.K.A. Pella

Well folks, we’ve spotted it! The best song on the album composed by someone I’ve never heard of! Maybe it’s A.K.A. Pella’s voices on this song that makes it so good. I’m not sure, but it’s easily the best song on the album. Kaufman sounds terrific on this song and A.K.A. Pella’s harmonies are flawless. Just sit back and turn this song on repeat. Listen to it over and over, because I guarantee you won’t get sick of it. The second time around A.K.A. Pella inserts their digitally mastered harmonies that they use on all of their albums to fill the background of the song. Habita Aneini! (Sorry, I had a singing moment). Anyway, don’t miss a note of this wonderful song; you’ll regret it. Here’s another cool note; compare the chorus of this song to the Yeshiva Boys Choir’s Korov Hashem. Can ya hear it?
Shtick – (4:30 – 4:43) The way the harmonies here switch back and forth from the left to the right speaker is fantastic.

The lyrics on this song are fantastic. They were composed for A T.I.M.E. And they explain the life of childless parents. Exactly what this organization is trying to help. It’s sung by the whole cast and they do a terrific job with it. Got to love hearing Abie’s voice on an English song, after all, that is what he does best!
Shtick – (2:50 – 2:53) Pruz’s quick falsetto piece

How can I describe this song? Funky? Crazy? Nuts? I don’t know, but it’s definitely different J. It sounds like something that I would expect to hear on the Kol Noar Boys Choir. I was half expecting it to be composed by Mo Kiss. Waldner definitely has a wide range in his composition ability. My question is why didn’t they bring Mo Kiss in for guest vocals? (“So Beautiful!”)

. Well, regardless, you have to listen to it yourself to understand the song. I can’t describe it in writing. If you want to come see me dance to it, then that may give you and idea!
Shtick – Every Ba ba ba badadada!

The music in this song makes me feel like I’m floating or that I’m in some sort of dream sequence. Regardless, it’s a nice lullaby. The music and vocals are very sweet and soft on the ears. It’s not a catchy song but it’s a great listen. The double harmony the second time around (2:34) is quite serene. I feel like this song should be playing for a baby while he or she is laying in their crib. Where’s my pacifier!? (Ya, I’m strange, but this is what happens when you spend a lot of time around little kids).
Shtick – (3:32 – 4:09) The la la’s sound like something out of nursery rhyme. Hehe!

Sunshine in the Rain (Acapella Version) – Performed by A.K.A. Pella – Featuring Shloime Kaufman

They go above and beyond the call with this bonus track. You pay for 11 songs and a good 12th song is thrown in to the mix as well. And it’s not some mediocre song, it’s a quality remake of Sunshine in the Rain, but completely vocal. I actually like this version better than the musical one. A.K.A. Pella is way too good at what they do. The beats, the harmonies, the melody, they’re all so smooth and perfect. What a perfect song to end the album with.
Shtick – (2:49 – 2:56) Kaufman’s high harmony is amazing here

Avodas Tzedaka is cram packed with at least 9 out of 12 solid songs. Which means that the majority of the album is great! We yidden rule by the rov (majority), so in my opinion, go out and buy this album! Not only will you be getting your money’s worth, but you will also be supporting the A T.I.M.E. organization, which “offers advocacy, education, guidance, research and support through our many programs to Jewish men, women, and couples struggling with reproductive health and infertility.” 1 Surely a worthy cause! Go buy it now! Go Go GO!!!!!!