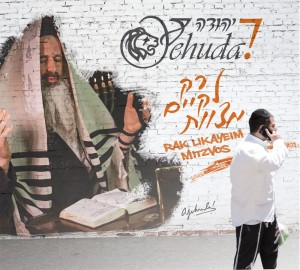 Yehuda! Is BACK! With a brand new album, entitled “Rak Likayeim Mitzvos”.

Yehuda broke onto the music scene some 20 years ago as a 15 year old teenage superstar. He was and still is the ONLY Jewish music singing star who sings, arranges the music, writes and conducts the vocal arrangements, plays multiple instruments including keyboards, guitar, drums, synthesizer and percussion and in even the recording, sound and mixing engineer for his albums. And Yehuda’s shows are the most exciting in all of Jewish music, leaving the audience both breathless from the interactive audience involvement with his fast upbeat songs and deeply moved by his sweet vocal renditions on his hit, kumsitz style, songs from the heart. After recording 6 bestselling albums, Yehuda took some time off to marry, raise a family and establish a business in his hometown of Cleveland. But the call of the stage and the call of the studio never left him and now he is back with his 7 th album, entitled “Rak Likayeim Mitzvos”. This album features 12 new songs from both established songwriters and new ones as well.

The title song, “Rak Likayeim Mitzvos” is a rocky, upbeat, dance tune based whose words
come from the writings of the Ramchal, whose yahrtzeit we just commemorated last week. It
is a spirited reminder that for a Jew, all of life is simply to do our mitzvos, serve Hashem and
stand strong in the face of challenge. The Ramchal gives us a clear motto for how to lead our
lives, while Yehuda has given us the joy to dance for the beauty of being a Yid and the clarity
of purpose that we all share in life.
Just in time for the theme of Shavuos, “Vi-haarev nah” is a classic, Yehuda style, singalong
song that embodies our daily tefilla that the Torah always be sweet for us, for our children
our grandchildren and all Jewish children.
And the song Chazu, of unknown authorship,p is the first upbeat, dance song rendition of
these classic words that exclaim how happy Hahsem is when we learn Torah.
Hodu laHashem, the album’s first song, whose words come from Hallel, is also appropriatefor Shavuos and Dayeinu, the one English song on the album gives thanks to Hashem for themiracle of the return of Eretz Yisrael in our time. Yichadshehu is an upbeat rendition of the tefilla for bentching Rosh Chodesh while Tzur Yisroel, Aleinu and Koleinu are classic “anthem style” Yehuda songs that are sure to move every listener. Finally Hamelech and Kaveh bring in the Sephardic dance feel to round out this modern, crisp, original and beautifully produced album. Yehuda’s clean, crisp, sweet and perfectly tuned

voice resonates from the album, through the various modern, sound systems right to your
heart. Listen, sing, dance, cry and be moved by this wonderful gift of song just in time for Shavuos and the summer of 5776!

Baruch hashem Yehuda! In Back! Indeed.