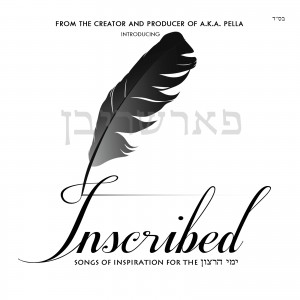 @splashnewsusa Inscribed. Farshribben. “Songs Of Inspiration For The Yimei Haratzon”. Very vague. Let’s see…Produced by C.D. Eichler who also produces A.K.A. Pella….hmmm…what kind of album is this?! It’s a must buy, that’s what it is. Not one big name composer on the album = 12 awesome songs. Isn’t that amazing? Not one song from Green, Waldner, Pinky Weber, or Baruch Levine, yet it still is a fantastic album. Can it really be that such talent is out there and we never would have known? In short the answer is yes. C.D. Eichler has done what no one else has dared to do and has put out a “no name” album and has shown everyone that there are young guys out there that have incredible songs collecting dust because unfortunately they have the wrong last name. Well here they are! This album will blow you away with a mix of heartwarming kumsitz songs, rocking techno, Chassidishe hartzkeit, and everything in between. You will not get bored of this album. Inscribed is like a fine bottle of wine and gets even better with age.

1. OSIM TESHUVA- AWESOMENESS. So you thought this album was all slow songs? Nope! This EDM track will quickly tell that. This is what we call an instant hit. Not much else left to say. Composed by Elie Schwab and music by AKAADAMBEATZ. I did not make that up. Who needs Infected Mushroom? We got Osim Teshuva! Sung by the one and only Dovid Gabay. This is the song that you buy the album for. Only bad part of the song is that it’s too short. I could have easily enjoyed another minute.

2. DAAY- A geourgeous song composed by Yosef Schick. This great song is turned into a fantastic song with the one of a kind vocals from Rivie Schwebel. Additional vocals by Avrumi Schwebel, Gavriel Drillman, and Rafi Drillman. Whoever thinks the words are made up has obviously never said the whole tashlich. Maybe this song will inspire you to stop taking shortcuts in Judaism. Lol! This is my favorite song on the album. And my wife’s.

3. EMES MALKEINU- Featuring Naftali Kempeh and composed by Chaim Gershon Davis. This song is already being sung by kumsitzin all over. I really like how Yitzy Berry and Eli Klein kept the arrangement simple and gives the listener the feel that he’s listening to a live kumsitz. Good stuff.

4. VHU RACHEM- Doni Gross and arranged by Tony Bella. This techno song features the vocals of Shloime Kaufman. The high part is very catchy but perhaps too simple for my taste. This is just the first of 2 Doni Gross songs you’ll hear on this album.

5. MI SHEAMAR- Featuring Moishe Horowitz. A hartzige chassidishe style song composed by Chaim Gershon Davis who I still can’t believe I’ve never heard of till this album! This Horowitz guy is also pretty good in his own right. He has very warm vocals and sounds like he really feels what he is singing. A classic Yitzy Berry/Eli Klein arrangement. My only critique is that real instruments could have added a lot to the song.

6. MELECH! MELECH! MELECH!- Name of this song is waaaay too long! Good thing this awesome Doni Gross thriller makes up for it. Featuring PRUZ- who sounds right in his element singing this song. The song has PRUZ written all over it, in fact they should have called it that. Woops, already got a song with that name. (Pruzbul) Just the right dose of autotune slipped into the vocals at various points in the track. Not too much, just right.

7. KUMA- Composed and vocals by Eli Scharf. Nice slow song with the music a blend of nice acoustic guitars and violins with drums joining the second half of the track. I like the high octave solo in the second low part together with the low octave choir. Nice contrast. The song does run a little a long which is a shame because we could have just borrowed a minute from this one and gave it to Osim Teshuva!

8. UTESHUVA- Really nice slow song. Featuring the smooth vocals of Hillel Kapnick. Composed and arranged by Hillel Kapnick and Nochi Krohn. The arrangement is pretty straightforward guitars and percussion giving a very kumsitzy (Is that word?) feel to it. Very pleasant to listen to. Type of song that I thought I would get bored of but I don’t. Hard to explain but I guess that’s a good think! Also Hillel’s wife makes really good chocolate chip cookies. Just thought you should know.

9. B’YODCHA- Composed by Chayala Schick featuring the Schick Family. Do we allow family get togethers on albums? Better check the rule book. It’s a slow song by the way in case you thought a girl was gonna make some real thumping techno song.

10. HAKOL YODUCHA- Composed and featuring Hillel Kapnick with backing vocals by C.D. Eichler and Nochi Krohn. The intro sounds Mexican. Not sure about the rest of the song though. Very different style high part. I needed to listen to the melody many times to really understand the style. Guess I need to listen some more times!

11.SOLACHTI- Featuring Micha Gamerman who released his debut album a little over a year ago. Composed by Yitzy Berry and arranged by Berry/Klein. They are a duo in case you haven’t noticed. Very nice melody for such a moving lyric.

12. WHAT DOES THE SCHACH SAY- When the cover said “Songs Of Inspiration For The Yimei Haratzon” this is what it meant. So heartwarming. So inspirational. So moving. NOT! Seriously C.D., you really had to put this song on this album?! :) Featuring A.K.A. Pella with special guest Ben Miller. Yup, he’s the guy from the “Aveirah Song” and “Chumrah Song”. Very funny song though that has some great lines sprinkled throughout the song as well as towards the end of the song. Love the Kreplach line! You got to hear this one.