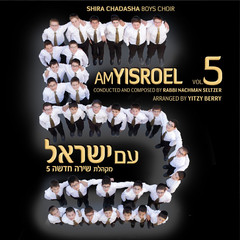 Tatty, which album is this?  It starts off  ” whoa,wo-how” sounds like Yeshiva Boys Choir. No, it’s sung with an Israeli accent. Is it a new Miami Mizrach? Hey, the second song is with an American Yeshivishe accent!! What’s going on? Kibbutz goluyois!

The answer is it’s the latest Shira Chadasha Boy’s Choir by Rabbi Nachman Seltzer who once again shows us that he is a leader in the world of Jewish boy’s choirs. Most songs are arranged by Yitzy Berry with some by David Epstein. He is the son of the legendary Suki Berry – the Suki from Suki & Ding – otherwise known to his talmidim as Rabbi Yissochor Berry.

The album comes with a bonus DVD that has a special tribute to  Rav Nosson Tzvi Finkel zt’l – the late Rosh Yeshiva of Mir. It may be worthwhile to buy it just for that alone! It’s truly very inspiring.

For those who are not yet familiar with Shira Chadasha, they are based in Israel but are sung for the most part in an American accent as the boys are kids from American backgrounds. However, as I mentioned previously, they are very capable to sing in Ivrit with an Israeli accent as well.

Many songs were released prior to the release of the album to whet our appetite for this masterpiece.

All songs were composed by Nachman Seltzer unless indicated otherwise.

The album kicks off with  a great song that brings forth a strong message. As mentioned previously, it is sung in Hebrew with an Israeli accent. For those that don’t understand it, you can follow it in the booklet or just wait for the final song of the album – the English version.

The tune is awesome and can be sung with many different lyrics. However, imagine Shachris on Shabbos when the Ba’al Tefilla has the guts to start something like this. This would snap any lingering drowsiness from the oilom and maybe trigger spontaneous dancing. Too much out of the box for you? Just listen to it on the treadmill…

This is the first slow song on the album and it a smashing hit with beautiful solos and harmonies. A bit more up tempo than the typical slow song, but that only adds beauty and uniqueness to the song. It is also an easy song to sing. My kids like to sing it at the Shabbos table and I am all for it.

This song also appeared as a music video a while before the album was released. It is an upbeat “Yiboneh”. You can maybe think of it as a cross between MBD’s Yiboneh on hi “Not for Sale” album and Miami “Yovoi”. You can actually feel more optimistic for the geula when you allow yourself to be drawn in the moment and tune in with your feelings.

Another slow song for your Shabbos seuda. The beginning has some haunting similarity to the song “In the Mountains” on JEP 2 which I believe the tune was composed by Shlomo Carlebach. You’re in for a cute surprise when it finishes with a solo by Nachman’s son.

Another upbeat techno song that goes well with Yiboneh. I really love this one. Both teach us to daven for Eretz Yisroel in an upbeat manner. There is a great music video featuring this song with footage from the recent war in Israel and choir kids learning and inspiring others to have bitachon.

7, “Avi, Avi” (Composed by and lyrics by Bracha Young Weil):

This song was written and composed by the wife of a close talmid of Rav Nosson Tzvi Finkel ZT”L the late Rosh Yeshiva of Mir as a dedication to him. The story of how it came to pass is actually printed in Nachman’s book “Class Acts”. On the previous Shira Chadasha album Al Hatorah there was a song “Hadran” with R’ Nosson Tzvi  actually featured on that song, delivering the opening lines from the 11th Siyum HaShas.This song has more power than “Hadran”. This along with the DVD is a fitting tribute to the late Rosh Yeshiva zatzal and as mentioned previously – it’s worth it to but the album for that alone.

The lyrics are from the Shabbos-day zmiros “Shimru Shabsosai”, which is not such a popular zemer (it doesn’t  appear in many benchers).The lyrics are a request from Hashem to rebuild Yerushalayim and the upbeat tune sticks to the theme of Yiboneh and Gam Ki Eilech.

For Shira Chadasha nerds and geeks do you sense a similarity in the low part to Kol Yisrael Areivim Ze Lozeh from the 2nd album?

Another song released in a music video with a beautiful solo from Nachman himself at the end. It’s a slow song so not the typical “Chasal Siddur Pesach”. I would describe this song as relaxing – perhaps reflecting the mood of someone who managed to finish the Seder with a sense of satisfaction that he transmitted the mesora of sippur Yitzias Mitzrayim to his family without getting inebriated from the Arba Koisos….

What can I say? Another fast song that can make you dance and sticks to the theme of being upbeat in the face of adversity. Also, two Pesach songs in a row to enhance your Seder experience.

I consider this to be the biggest hit of the album. It was also released as a video a while ago and it features Simcha Sussman from Shalsheles. Actually, it is mostly sung by the 2 adults and the choir provides background support. It is a unique song as it starts as a typical song with Hebrew lyrics then transitions to English. The specialty is that the song is a tefilla and the English lyrics add specific tefillos so it’s like you daven on Rosh hashana Zochreinu Lechayim and then you pause and add your own tefillos. I sang it at my Yom Tov table this past Rosh Hashono and it really inspired myself and my family.

For us Anglos that understand English better than Hebrew we are treated to the title track in our language. It’s like a totally different experience from the Hebrew version. Another song that was released as a music video before releasing the album – yes the ENGLISH version was released on a music video.. The song is wonderful and the solos are amazing.

I am so grateful to Reb Nachman for giving us this truly geshmak and uplifting experience with this album and the DVD that comes along with it. Like I said before, the DVD alone is worth the price of buying the album.

Purchase the album at MostlyMusic.com