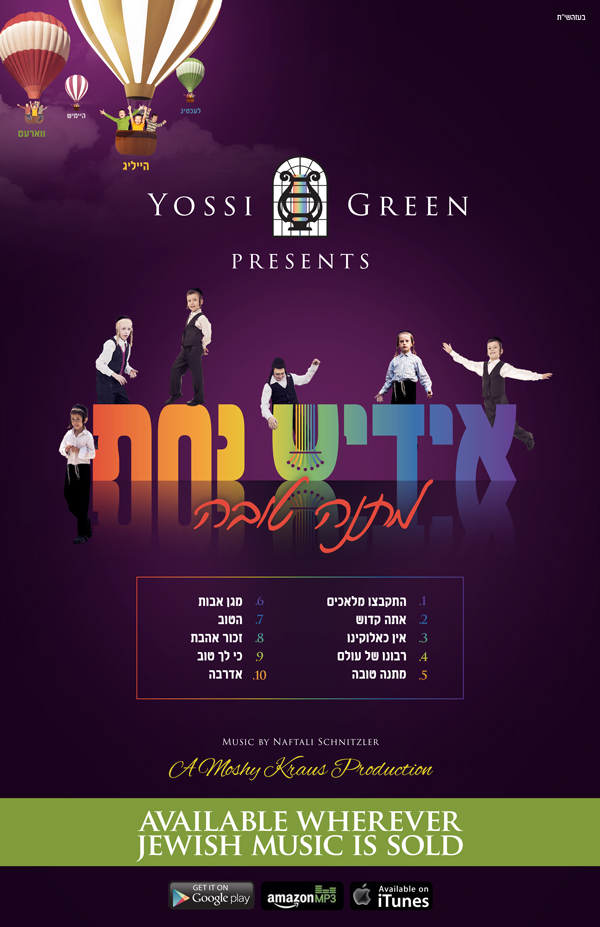 A RETURN TO MUSICAL ROOTS

Yossi Green has gone back to his roots with his latest project and CD release entitled “Yiddish Nachas!” Quite a few years have passed since Yossi began his composition career in London, England, but he remembers fondly that “it all began with my writing songs for my mentor at the time, the inimitable and Jewish Music trailblazing Yigal Calek and his choir, the London School of Jewish Song.” Yossi furthers asserts that this was not only the most professional and best sounding choir at the time, but the greatest concert performance act in the Jewish world in its time, as well. He further asserts that “Most of the great performing stars well-known today were just opening acts for the London School in its heyday.” Yossi felt that the time has come to for him reconnect with that genre and start writing songs for children’s choir again. In his own words, “The innocence, warmth and honesty that radiates out of the sweet voices of Yiddisheh Kinder singing in general and from Yiddish Nachas specifically is unparalleled anywhere else!”

Yossi is well known for being the one to launch the careers of many of the well-known artists we are all familiar with today and “presenting” their primary albums to Jewish Audiences all over. The original working title for the album was titled Kinderlach & Einiklach, however the name was deemed to be a bit childish. After re-thinking it, it was decided that EVERYONE wants and needs Yiddish Nachas, which gave us the album’s final name. In addition, Yossi tells the story that “A father once came in to the Satmarer Rebbe, Zatzal asking for a Brocho for Nachas from his children, to which the Rebbe promptly responded that since Esav also had a son called (Aluf) Nachas, when we ask for a Brocho for Nachas we ask for YIDDISH NACHAS.

PRODUCED and CREATED IN MONROE, NY

The entire project was produced in Monroe, NY where most of the children are from as well as the location of the home and studio of the multi-talented, Chassidish, soft-spoken young man who is the project’s producer, Moshy Kraus. The name of the studio is MK Studios, which is the place where Moishi Kraus works his daily magic on many interesting projects, all with the common factor that they are Heimish, Chassidish and incredibly creative. The fresh and innovative tasteful orchestrations were created by the “artist” Naftali M. Schnitzler, a person who has burst onto the Jewish music scene and has mastered the craft of arranging and interpreting Jewish Music with a Taam known in Yiddish as a Noch-Taam – נאכטעם. This means that when you hear his arrangements you want Noch or more! Every time Green listens to the tracks, he cannot help but smile. In his words, “composing songs for such a project gives me the freedom to write melodies that are totally interpreting the message I feel in the lyrics without consideration of other factors like whether they fit into a genre of Wedding Dances, etc. Wedding Dance music is important and has its place, but never ever will they replace Jewish Music in general.” In keeping the project organic, all its artwork was created in Monroe by a young man who combines cutting edge design with a Chassidishen Taam,Duvid Kaufman of Dart Design. Duvid is an emerging and rare talent with a vision of marketing combined with creativity who completes a trio of production, orchestration and artwork, all hailing from Monroe, NY.

YIDDISH NACHAS features Jewish songs and music performed by children who sing from the depths of their hearts with voices of Holiness, Purity and Innocence. It’s time
you experienced YIDDISH NACHAS. And in the words of our composer, “Yiddish Nachas: we all WANT it and we all NEED it!”

The album will be distributed by Nigun Music and iy”h be in stores later in the week.