Well known Baal Tefilla & Chazzan Harav Meir Duvid Farkas is finally releasing the first single of his longly awaited debut album, which is due out this winter. For Meir Duvid a Breslov Talmud for more than a decade, this song is more than just a business card. It’s about being mechazik people who are considering to travel to Uman for Yom Tov and those who ARE going. The lyrics, chosen by Farkas are fromחיי מהור”ן סימן קפ”ט וסימן קצ”א which delivers a tremendous amount of chizuk for people, to move on with their daily lives, and especially to be prepared for עולם האמת. Knowing that Reb Nachman is there for them, and taking care on their well being as he promised.

The single, ”Mah Lochem L’doieg,” was masterfully composed & arranged by the mega talented producer/composer/arranger Naftali Schnitzler. Not only does ”Mah Lochem L’doieg” feature special guest vocalist Yoeli Klein from Israel (who introduced the world to the hit song ואפילו בהסתרה), but the song also features original lyrics by the lyrical Lipa Schmeltzer. Rav Farkas has a special kesher with Yoeli for many years, and they are currently studying together the works of Reb Nachman. Klein appeared on this song to show appreciation to Rav Farkas. Rav Farkas has also been involved with Lipa and his albums for several years now, helping him introduce a few holy songs together.

The song is rounded out by some phenomenal choir work by the premiere choir in the business the famed ידידים choir lead by Yanky Orlansky, and conducted by Tzvi Blumenfeld.

It is Rav Farkas’s hope that we all will have no more worries and have have a כתיבה וחתימה טובה! 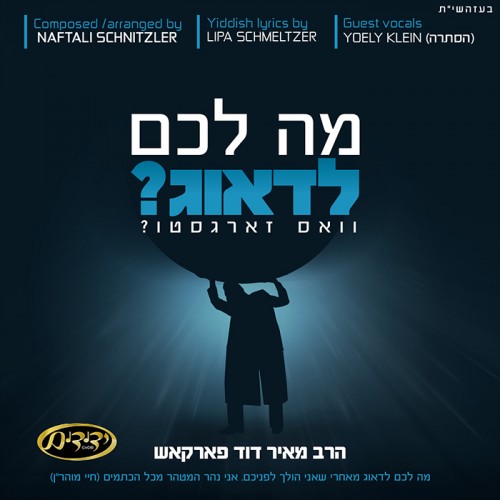