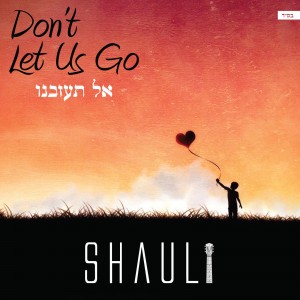 Since 2010 singer/songwriter Shauli has been sharing his music with the world at large. It started with his debut EP Simcha Belibi, and was followed by three singles, all while he works his way to his second album.

With the fast approaching Yomim Noroim, Shauli decided that it was time to share a new song with the world. “Don’t Let Us Go” is about asking Hashem not to leave us. Beseeching him to always stay close to us, especially now in the end of days when things are so hard for Klal Yisroel. Besides for the original lyrics, the song features lyrics from Shema Koleinu “Al Tashlicheinu L’et Zikna, Kichlot Kocheinu Al Tazveinu.”

The song concludes with the Pasuk “Ahavti Etchem, Amar Hashem,” reminding us that Hashem loves us and if we need anything we just have to ask.

Shauli composed this song this past winter when he was through a bump in life. It was his way of praying to Hashem, and now he wants to share it with the world.

For the first time EVER, Shauli will be releasing a music video together with this new single “Don’t Let Us Go.” The beautiful video was shot and edited by Moshe Finkelstein of T & M Productions. Don’t Let Us Go is available on Itunes for just 99¢.