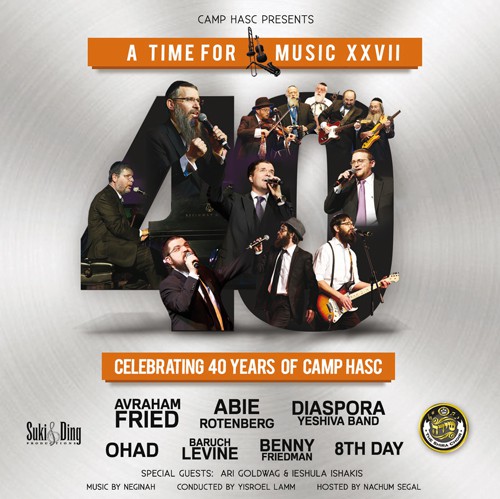 Recently I’ve been pretty busy on a music project myself (details to be announced somewhat soon ) so I haven’t gotten around to making a review for this awesome album till now, but here goes:

Hasc for years (27 to be exact) has been known for making concerts that are creative and innovative. Over the years we’ve seen everyone from Carlebach to MBD and everyone in between. This album like all the ones before it has a great selection of musical artists and even a surprise guest or two.

1. Negina Overture – As most Hasc albums do, this one starts off with Nachum Segal introducing the Negina Orchestra led by Yisroel Lamm. The overture usually gives us a taste of what is to come later in the show.

2. Dreams Come True – Abie Rotenberg leads off the show with Benny Friedman singing “Dreams Come True”. This song was last recorded for Journeys 4. Abie wrote an adaptation of the song centered on the need for Camp Hasc and all the good they do.

3. Sholom Aleichem – Benny Friedman is next with his “Sholom Aleichem”. This song composed by the multi-talented Ari Goldwag has been making the rounds on the simcha-circuit after being released on Benny’s 2nd album “Yesh Tikva”.

4. Hashem Melech – Benny then leads us into one of the biggest hits Jewish music has seen since Yesh Tikva. Gad Elbaz’s “Hashem Melech” started out as a single release that took the Jewish music world by storm from Israel to America. This song has also been making the rounds on the simcha-circuit.

5. Kvodo – This next song is sung by Ieshula Ishakis who besides being a great singer is also a grandson of the Hasc founding Kahn family. This song originally appeared on Lipa’s “Leap of Faith” album.

6. Chitty Bim – This next song is performed by one of the hottest Jewish bands today. Although the Jewish music scene may be filled with a number of singers, rarely does a band ever make the ranks. Ever since the “Tracht Gut” album, 8th Day has impressed us with their rhythm and energy on stage. This song originally released on the “All You Got” album.

7. Hooleh – The next song up is the title track off 8th Day’s “Hooleh” album. I said before in different articles of mine that I think over the next few years we will see a large volume of English written songs in the Jewish Music world. While having Hebrew songs is nice, many people like to understand the messages that are being transmitted through song.

8. Modim – Baruch Levine brings us the next song which also happens to be the title track of his most recent album “Modim”(You can see my review on the album here: http://jewishmusicreport.com/2013/09/12/hillelkaps-review-of-baruch-levines-modim/) this is a gorgeous slow song and Baruch’s voice definitely does it justice.

9. Uforatzta – This song is another hit off of Baruch Levine’s most recent album “Modim”. I can vouch for this song as I myself have played it at the majority of Simchas I play or sing at (including last night).

10. Am Echad – One of the moments I’ve been waiting for a pretty long time! (There’s another one coming later) One of the greatest artists finally makes his debut on the Hasc stage. Multi talented composer/arranger/singer/musician Ari Goldwag gets the crowd moving with his latest hit “Am Echad”. This song delivers a great message and has gone pretty far (considering is 100,000’s of YouTube hits)

11. Pischu Li – Here’s the next moment I’ve been waiting for a pretty long time! One of my all time favorite Jewish bands takes up the stage at Hasc for the first time in a number of years. The Diaspora Yeshiva Band helped to evolve Jewish music over the years and whoever’s idea it was to get them back on the stage I applaud you! The first song they sing is “Pischu Li”, a favorite among Diaspora Yeshiva Band fans.

12. Lo Es Avosaynu – DYB then leads us into an amazing rendition of Lo Es Avoseinu. Not only can these guys sing but they can play! I suspect that with the way Ruby Harris can play he must have broken the sound barrier with his bow a few times. Along with some great guitar work by Avraham Rosenblum and the rest of the band these guys definitely still have it!

13. Hofachta – Even for those people who weren’t die-hard DYB fans, this next song is pretty recognizable. “Hafachta”, one of the most famous DYB songs gives us the energy so many people experienced at their concerts over the years.

14. Malchuscha – Many of you will recognize Ohad’s Bichas Habonim from countless Chupa’s. On the same album as that track is another that will get you dancing. “Malchuscha” composed by Eli Gerstner is sung on the Hasc stage by Ohad himself. Ohad continues to show us that voice is out of this world!

15. Chupa Medley – If you thought that Ohad sang fast songs well just wait until you this next one. This Chupa Medley really showcases Ohad’s vocal capabilities.

17. Aleh Katan – Up next is a gorgeous rendition of Avraham Fried’s “Aleh Katan”. This is one of those songs that is still being played at Simchas despite having been released a while back. To repeat what I wrote above, Avraham Fried’s vocals are absolutely amazing. I don’t know what he’s doing to get them that great but whatever it is he should continue doing it!

19. Ivdu – Besides for “Hafachta” if you had to pick one song that Diaspora Yeshiva Band is known for without a doubt it would be “Ivdu”! Sung by DYB, Avraham Fried, Benny Friedman, and 8th Day you can hear the energy in the crowd as they sing it. Featuring great solos by both Ruby Harris and Avraham Rosenblum.

20. Finale – The finale on this album features “Hafachta”, “Yesh Tikva”, “Malchuscha” (DYB), “Yalili”, “Toda”, “Bentch”, “The Ninth Man” and other favorites through the years !
All in all whether you own the entire Hasc collection till now or are considering your first purchase of a Hasc concert album, this is definitely one of the ones to get!

You can see photos from HASC 27 here, and the concert can be purchased or downloaded (audio only for download option) here.