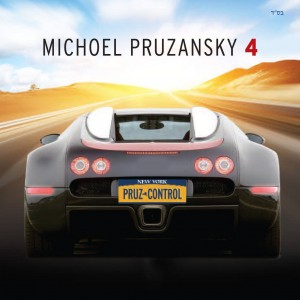 I have been a huge fan of Michoel Pruzansky and was sure I had written at least one review on him previously. I was shocked when I went back and checked and saw that besides a brief mention about him in my HASC 26 recap I’ve never written about him before. Michoel is something like the handy man of the Jewish Music scene. He has a very nice powerful voice, energy that can be felt by just listening to him, nice enjoyable songs on his albums and tasteful arrangements. He sometimes can get lost amongst some of the other singers who might have sweeter voices or a wider range but just because he flies under the radar a bit doesn’t mean he isn’t as talented and pleasant to listen to. Michoel also manages to come up with catchy album names such as Pruzbul, MP3 and his latest release Pruz Control (ok Ashrecha isn’t catchy…but give him a break, it was his 1st album). On this album Michoel co-produces together with Yochanan Shapiro of Acheinu fame, and the inimitable Israeli music superstar Shai Barak arranges the music. Without any further ado here are my song by song assessments:

Am Echad – The album begins with an upbeat techno styled song composed by Michoel together with Yitzy Waldner. Even before Michoel sings, I already can hear the unique and incomparable backup vocals of Yitzy Spinner. This song is a catchy foot tapper and a real enjoyable listen.

Simchat Chatanim – This is certainly the most interesting song on the album and the way it begins definitely threw me the 1st time I heard it. It is a sefardi style horah with a sefardi (he gives special thanks to Uri Bitan and Avi Perets so it must be one of them) chanting to begin. The song itself is composed by Yitzy Waldner, who has proven before that he can compose sefardi style songs. I like how some Yiddish gets thrown in the middle (ok, it’s only ayn, tzvei, drei but still is cute).

Aleinu – I think there is only 1 thing I have to say about this song: Yitzy Waldner ballad. Get it? I do. Love it too! In keeping with recent tradition, Yitzy guest sings on this song.

Ain Od Milvado – This song is a Yishai Lapidot special. It’s obviously a techno song and also a very good one too! Add in the Shir V’shevach Boys Choir and you have yourself a real pleasurable listen. And to think that I used to not even be able to listen to a techno song without skipping it…..

Koli – This is a real heartfelt and hartzige balled composed by Ari Goldwag. It is a beautiful song. Michoel adds some English lyrics to the song that really add to the song. The backup vocals are compliments of the Shapiro brothers and in the Acheinu style.

Ashrei Mi – This is a rock song co-composed by Dovy Brazil and Michoel. I love the horn heavy arrangements on this song. The backup choir on this song also has an Acheinu feel to it and to no surprise it features 3 of the Shapiro brothers.

Pray – This is another quality composition by Yitzy Waldner. The lyrics of this song are obviously about praying when things look bleak and not to give up hope.

Shuva – A rock ballad co-composed by Mordechai Klein and Yitzy Waldner, this song is enhanced greatly by the child soloist Moshe Kahan. I like how the electric guitar is used in this song, both the solos and in the background.

Chaverim – On an album filled with techno style songs, this is another techno, composed by Doni Gross. It is dedicated to all the chaverim volunteers for all the chesed they do! This is a very enjoyable song that is even more enjoyable because it seems that the composer is a newcomer into the Jewish Music scene. That’s something that always makes me happy. The Shapiro brothers add a lot to the song with their background vocals as well.

Orech Yomim – With all my mentions of the Acheinu style found on this album, nothing is more Acheinu style than this song. Composed by Co-producer Yochanan Shapiro and with him adding the background vocals, this is it. Michoel’s chazzanus at the beginning is really nice and shows off his talent. This song is an upbeat one but after all the techno on the album it has a very calming feel and is a great song to end off the album.

In conclusion, if you are looking for an album with today’s sound that you want to be able to play over and over again this is for you. You can find it on www.nigunmusic.com or anywhere quality Jewish Music is sold!