An Interview with Acheinu Composer, Abie Rotenberg as We Continue to Daven to #BringBackOurBoys 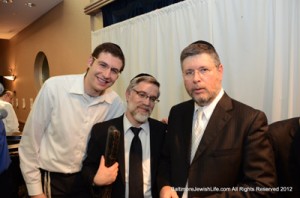 Baltimore, MD – June 21 – With the recent kidnapping of our boys  in Eretz Yisroel, Klal Yisroel has galvanized and organized numerous gatherings for tefila and Tehillim, most of which have culminated with the singing of Abie Rotenberg’s famous song Acheinu, an affirmation of the achdus that has enveloped Jews everywhere in the wake of this terrorist act.

“I have never seen such achdus as displayed by all Jews of all stripes as I have witnessed this last week,” said Mrs. Rachelli Frenkel, mother of Naftali Frenkel, one of the three kidnapped teens, in a phone conversation with Rav Yitzchok Eisenman.

Gobbie Cohn, a contributing writer for BaltimoreJewishLife.com, decided to contact Abie and ask the composer to share his thoughts on how this one niggun has become so firmly embedded in our hearts and minds as we daven for the speedy and safe recovery of our boys.

GC: Over the last 9 days we have heard the words of Acheinu being sung over and over and over with a hisla’avus like never before, as we daven to HKB’H to expedite the safe return of our 3 boys kidnapped by terrorists. The zechusim you are receiving  for having composed this niggun are undoubtedly countless.

In what year was Acheinu composed?

AR: If you were to ask me in what year I wrote a particular composition, I probably could not tell you with any degree of accuracy. Acheinu however I know was written in 1990. This is because it was written shortly before the album Lev V’nefesh – which it appeared on – was produced. Lev V’nefesh was released right around the time the first Gulf War broke out. I always say even a song needs mazel. So with Sadaam threatening to launch skuds against our cities, the message and melody of Acheinu struck a chord and it became very popular.

GC: When you composed Acheinu what was going in the world that had you adapt those words to the tune?

AR: I don’t recall any particular reason for composing a tune to the words Acheinu. As we say in Yiddish, es felt nisht kein tzaros, there are always more than enough problems. But I do remember that in this instance, the melody was written specifically for those words, not just as a tune for which the words were chosen later.

GC: How do you feel and what goes through your mind when you hear that practically every Kinus tefilah ends with your niggun?

AR: I am certain that it is gratifying for any composer, to hear his song being sung. All the more so if one gets the sense that his/her song has enabled others to reach a higher level of spirituality. I was very happy to hear from you (until then I was unaware) that people have been singing Acheinu aftertefilos for the boys. We certainly need rachmei shamayim and if the urge to sing the words of Acheinu with my niggun enhances their kavana, then I feel privileged to be a part of that.

GC: Is there a personal message you’d like to deliver to the families of the boys as well as to the rest of klal yisrael who you have helped unite?

AR: The families of these boys have demonstrated extraordinary bitachon and emunah which has been a phenomenal Kiddush Hashem. May that, in and of itself, merit the return of their loved ones safely. No one will be happier than I when instead of Acheinu, we can all get together to sing and dance Reb Shlomo’s yachad yachad…signifying the reuniting of these wonderful boys with their families.
Photo Caption: The Baltimore Jewish community was honored by the appearance of world-renowned composer Abie Rotenberg shown here with (L-R) Yehuda Mond and Nossi Gross of Zemer Orchestra