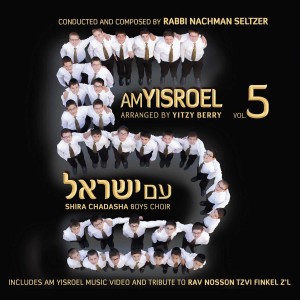 The boys’ choir has always been a mainstay of Jewish music.  From the earliest chassidishe choirs, to Amudei Shaish and Toronto Pirchei in the ‘70s, to Tzlil V’zemer and Miami in the ‘80s and ‘90s, to YBC, NYBC, and Shira Chadasha today, there are ample examples—and dozens of albums—from the song-and-dance groups made up primarily of the 8-14 age bracket.  I have heard theories that boys’ choirs are so popular among frum listeners because they replace the alto and soprano range of the listening spectrum which would normally be filled with female vocalists (which are obviously not an option for frum male listeners).  Maybe, but it could just be that we’ve got a lot of talented boys in this gene pool.

Shira Chadasha Boys Choir is the brainchild of celebrated author, teacher, and songwriter Rabbi Nachman Seltzer.  The choir is made up of Israeli children who are able to sing fluently in English, Yeshivish Hebrew, and Ivrit (in fact, I had no idea that the choir was based in Israel until I read the liner notes and saw that all of the recordings were done in Ramat Beit Shemesh and Har Nof).  Shira Chadasha’s first album appeared in 2005, and they also sing backup on Yaakov Shwekey’s L’sheim Shomayim and Yochi Briskman and Lipa’s The Next Project X.

Shira Chadasha seems to aim for the middle ground in terms of its overall sound flavor—splitting the goalposts set by traditional sound of Miami on one end and the ultra-modern sound of YBC or the Kinderlach on the other.  Consequently, digital effects (including AutoTune) are used on the kids’ voices, and they are noticeable, but they are kept within a tasteful limit.  In addition, don’t be surprised when you hear copious amounts of synthesized drum beats and bass lines—it’s part of the territory and is to be expected and embraced.

Am Yisroel, the choir’s fifth studio production, hits all of the marks you would expect from listening to their previous albums.  The soloists’ talents are put on display nicely, and the choir is obviously well-coached and well-conducted.  Most of the arrangements come courtesy of Yitzy Berry, who does an excellent job.

Songs are composed by R’ Nachman Seltzer unless otherwise noted.  Links point to official music videos of songs, when available.

Track 1, “Am Yisroel (Ivrit)” (Composed by Moshe Fuchs, lyrics by Aviya Daniel and Tiferet Shish): The title song of the album, the (Israeli-accented!) Hebrew version of “Am Yisroel” launches us right into the album.  This song is a techno-pop anthem in the vein of Miami’s “Yavo”, and the lyrics express the theme of Am Yisroel’s unique place in the world and our special relationship with Hashem.

Track 2, “Kel Adon”:Awesome.  A driving rock song, which I could see becoming a go-to song for camp choirs to rip off on a yearly basis (that’s a good thing, in case you were wondering).

Track 3, “Hiney” (Composed by Yael Seltzer):One sign of a good, powerful, slow song (for me, at least) is its ability to get my kids singing it (melody and lyrics) by the third or fourth listen.  Mission accomplished.

Track 4, “Yiboneh” (Also composed by Yehuda David):I think it may be an international law that every Jewish boys’ choir must have a techno/disco version of “Yiboneh” somewhere in its repertoire.  Miami’s came in 2009 (“Yavo”), Tzlil V’Zemer’s was in 1998 (Track 5 of Hear Us Now—great album, by the way), and Shira Chadasha’s offering comes to us on this album.

Track 5, “Menucha”: Continuing on the Shabbos Zemiros theme, the album continues with a nice rendition of the popular zemer “Menucha V’Simcha”.  This song uses the stanza “Sh’mei Shamayim” as its refrain, and the orchestral arrangements are tastefully done and appropriate.

Track 6, “Gam Ki Eilech”:Because of course a choir based in Eretz Yisrael has to have a song with the most famous “protection” themed-lyrics of all time.  And of course it’s techno.  Did you expect something else?

Track 7, “Avi, Avi” (Composed by and lyrics by Bracha Young Weil): This song, written in English, is dedicated to R’ Nosson Tzvi Finkel זצ”ל, the late Mirrer Rosh Yeshiva, who passed away shortly after the last Shira Chadasha album was released (R’ Nosson Tzvi was actually featured on that album, delivering the opening lines to the track “Hadran” at the 11th Siyum HaShas).  “Avi, Avi” was composed by the wife of one of R’ Nosson Tzvi’s close talmidim, and the relationship that they had had with the Rosh Yeshiva comes through in the first line of the song’s refrain: “אבי, אבי, רכב ישראל ופרשיו!, (Father, Father, Yisrael’s chariot and its horseman!)”, which were the words used by Elisha to mourn his rebbe Eliyahu HaNavi, and by King Yoash to mourn Elisha.  The CD version of this album also comes with a video tribute to R’ Nosson Tzvi.

Track 8,“Yishoriru”:This track is my single favorite song on the album.  A lively rock song with some serious Shalsheles Junior flavor (they use “yeah, yeah, yeah” instead of “oy, oy, oy”), and one of the best sax solos I’ve heard in recent years, this track is a winner from beginning to end.  The lyrics are from the Shabbos-day zemer “Shimru Shabsosai”, which is not a particularly popular zemer (it doesn’t even appear in many benchers), which helps make the lyrics unique and interesting.

Track 9, “Chasal” (Composed by R’ Yishai Saks):We move from Shabbos to Yom Tov.  This song, with lyrics taken from the end of the Pesach Seder, is a slow rock ballad, which slowly builds in intensity and complexity until Rabbi Seltzer himself takes over after the bridge and key change (composer Yishai Saks handles solo duties in the video version).  Very nicely done.

Track 10, “V’hi Sheumda”: More techno-rock! More Pesach!  I especially like the part of this song which is arranged like a question/answer (around 2:15 in).  Great arrangements, great song.

Track 11, “Zochreinu”, feat. R’ Simcha Sussman: This song is actually a couple of years old—it was originally released in 2011 to benefit the Ramat Beit Shemesh tzedakah fund.  Rabbi Seltzer and Simcha Sussman (of Shalsheles fame) handle most of the lead vocals in this song, which begs Hashem to remember His people for life, joy, and goodness during the Days of Awe.

Track 12, “Am Yisroel (English)” (Composed by Moshe Fuchs, lyrics by Moshe Fuchs and R’ Nachman Seltzer): See? I told you these kids were bilingual.

In summary, it’s been quite a while since a boys’ choir album grabbed my attention the way Am Yisroel did.  If you love boys’ choirs, you owe it to yourself to check out Am Yisroel.