Shimon’s Review of “Beats” by EvanAl Orchestra and Yoely Greenfeld 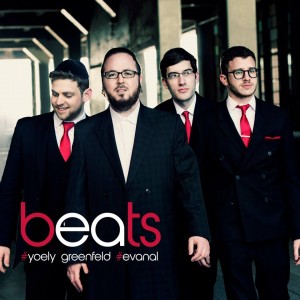 First things first: I am, and always have been, a huge fan of compilation albums.  From the old-school What A Wedding albums of the ‘80s featuring Neginah Orchestra, to Yochi Briskman’s Project X albums of the ‘90s and 2000s, to Special Moments starring the Werdyger clan, to Yossi Green’s Shades of Green, to Benny Friedman’s Nagila V’nismicha, I feel that a well-done compilation album gives the Jewish Music fan an insight into the zeitgeist of the industry (remember how Regesh’s “V’yaazor” was the hit of the year in 1991?)—and, to a certain extent, of Klal Yisrael in general.  On the other hand, listening to 25-year-old compilation albums can also highlight how—let’s see, how do I put this nicely—standardized the Jewish wedding has become over the last quarter-century.

Enter Chaim Rosenbaltt, Motty Weiss, Eli Lax, and Yaakov Friedman of EvanAl Orchestra.  EvanAl (Evan=אבן=rock, Al=על=on –> “rock on”…sorta…get it?) has grown into one of the hottest chasunah bands in the industry, mainly due to their unchanging core, their insistence on top-notch instrumental talent, super-tight arrangements, and top-of-the-line singers.  Beats (with apologies to Dr. Dre and Jimmy Iovene), is their debut album, and it is a stellar first effort.  Featuring Yoely Greenfeld’s vocal talents, some signature shtick (hashtags anyone?), and a huge collection of songs (54 tracks, spanning nearly 80 minutes), Beatsiseverything you can ask for in a wedding album.  Naftali Schnitzler produces and arranges with help from the EvanAl guys, while Mordy Kraus handles the well-done backup choir.  In addition, Avi Peretz and Michoel Schnitzler add their vocal talents to the album in various spots.

Track 1, “Grand Intro”: If there is one thing EvanAl is known for, it is their legendary chosson/kallah intros.  For example, this one.  Or this one.  Or take your pick of any of these.  This album starts with a great mashup of the theme from Game of Thrones and…something.  For the life of me I can’t figure out the second half of that intro.  Any help would be appreciated.  Seriously.  It’s driving me nuts.

Tracks 2-8, “#Freilach Set”: The album’s first set is a standard freilach dance medley, which features a good mix of chassidish and yeshivish, old (Carlebach and MBD) and new (Tzaly Gold), set to a solid arrangement which doesn’t take too many chances with instrumentation and song selection (we’ll get to that later).  I particularly liked the inclusion of MBD’s “Tov Lehodos” (from Jerusalem Is Not For Sale) and “Ve’Elokim” by Chabad (a.k.a. “S’fashkenaz” from Journeys IV).

Tracks 9-17, “#Disco Set”: Now we’re talking.  How Gadi Elbaz’s “Hashem Melech” became so popular all of a sudden (despite having possibly halachically problematic lyrics—ask your local competent posek for details) is beyond me, but it’s the first song in this set, and it’s very well done.  Other recent songs that made the cut include Yoely Greenfeld’s own “Neshimu” and Shwekey’s “Lo Yaavod”.  The set ends off with a track called “EvalAl 2014”, which features Motty Weiss (as his alter ego “DJ Matdub”) performing one of his patented pre-sequenced DJ tracks.

Tracks 18-25, “#Israeli Rock Set”:Thefirst rock set on the album, I’m not really sure what qualifies this track as “Israeli”, but OK.  This set begins with Yoely Greenfeld’s “Habotchim”, and then turns old-school, to Avraham Fried’s “Keitzad” (from Aderabeh) and MBD’s “Tomid B’simcha”.  The set then moves to some chassidishe discos (Chabad, Tzali Gold, Breslov), before ending off with a Carlebach niggun (“Ma Shehaya”, most recently redone by Meydad Tasa).

Tracks 26-35, “#Heibtzach Set”:Apparently, “heibtzach” is how you say “disco” in Yiddish?  This set begins with MBD’s slow “Shalom Aleichem” (From Kisufim), which quickly turns into Benny Friedman’s disco “Shalom Aleichem” from Yesh Tikva.  From there, the set is pretty much straight-up chassidish, featuring songs from Lipa (including “Nodeh L’shimcha” and “Hang Up The Phone”), Berry Weber (“Oy Tatte”), Srully Werdyger (“Chabad Niggun”), and Tzaly Gold (“Velo Neivosh”).

Track 36, “#The Penguin Dance”:This.  Apparently this is a thing at Jewish weddings now.  Moving on…

Tracks 37-47, “#World Set”: Otherwise known as the “hora and techno/disco” set.  This set features all sorts of discos and horas, such as Middle Eastern (“Eizeh Kif” by Itzik Eishel) and chassidish (“Hecher” by Shloime Taussig, songs from Ramat Beit Shemesh (“Am Echad” by Ari Goldwag), Cleveland (“Yesh Sachar” by Yehuda!), Crown Heights (“Yesh Tikva” by Benny Friedman—with the Yiddish lyrics from the Yedidim Choir remix), Connecticut (“Ufaratzta” by Baruch Levine), and the ‘60s (“Na na na na, na na na na, hey hey hey, Mazel Tov!” …wait, those weren’t the original lyrics?!?!?).  Plus, Shlomi Cohen! And Shlomi Cohen! More Shlomi Cohen! Did I mention that Shlomi Cohen makes an appearance in this set?  Oh, I did?  Good.  Because he’s awesome.

Tracks 48-54, “#Rock Set”: This set is for the end of the wedding, when all of the roshei yeshiva have gone home and Eli Lax is free to unleash his wicked axe upon the unsuspecting guests remaining at the chasunah.  And boy, does he unleash.  The intro to Dovid Gabay’s “Tamshich” has never been so pumped up—and the set just continues from there.  Remember Dedi’s “Tipol”? Plus, we are treated to rocked-up renditions of Shauly Waldner’s “Siman Tov”, Mendy Gerufi’s “Keitzad”, and Itzik Eishel’s “Im Ain Ani”.  The set ends off with Avraham Fried’s “Kach Es Sheli”, which transitions into the classic “Someday” drum pattern, and then into Yoely Greenfeld’s “Im Eshkacheich” with the Grand Intro (see Track 1) playing in the background to close out the album.

In summary, Beats is a great compilation album which touches on virtually every genre in Jewish wedding music, and also provides an insider’s lens into what’s popular on the chasunah scene in 2014.  The CD is already into its third printing, so go get it now if you haven’t gotten it yet.