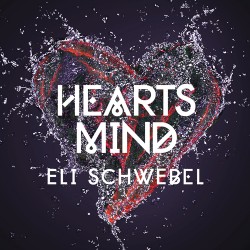 How often does an album come out in the Jewish Music scene that transcends the Jewish Music scene both in style and substance? The answer is not very often. Eli Schwebel has done something amazing with his recently released his debut solo album Hearts Mind. I am not sure if I can define this album by one specific genre but I know that in this review I will not be able to predict that any song on this album will be the next hit freilich, horah, rock or dinner music favorite on the wedding circuit. This album is a breath of fresh air to those who are looking for something different than your typical Jewish Music release today. Eli, the son of Dveykus legend Rivi Schwebel, and himself a successful and popular performer in the group Lev Tahor, has worked on this album for a number of years and this is his style and talent at its best. Eli has his partners in collaboration but he is involved with the composing and arranging of the album himself. The songs and lyrics are deep, intense and personal. My one issue with the album is that it’s too short! Being that the styles and lyrics are so complex, I am not going to give a song by song assessment but rather a synopsis of the song and my brief opinion of the meaning of the song.

We Are One- The song starts slow and builds up into a toe tapping tune as it progresses. This is a deep song about a person who feels lonely and misunderstood before finding himself and realizing that our differences don’t really separate us from each other.

Aibeshter- Eli’s take off of the famous Tzlil V’zemer hit. This haunting song talks about the pain of losing people we love and the memories fading.

Yagga- instead of me trying to explain this song if you really want to understand what this album is about, go download this song for free (it was released as a single prior to the whole album going on sale). While you dance around listening to this song, you’ll get an appreciation for Eli and the whole album. You can download the song here: http://www.mostlymusic.com/yagga.html

Like The Sea- This is a cute song about a person (in other words Eli) finding himself in life. As a complex individual it seems he’s traveled a long road and finding himself was quite a journey. Just like this song!

Ani Yosef- This seems like a song with the same theme as the last song but that he’s found himself and feels free now. The tone of the song is more somber but probably more of a relief than sadness.

Rose Like Me- This pop song talks about our parents guiding us and helping us find our way but in the end it’s up to us to find our way and follow what Hashem has in store for us.

Don’t Stop Giving Love- Another toe tapping tune…just read the title of the song and it makes all the sense in the world!

Shabbos Takes Me Home- This song really hits home. How many of us feel like we’re running in circles and just need to take a breath. Shabbos is that day we have each week to let us breath and get our footing. A day in Eli’s words, to “feed my soul!”

Shtai Auf!- Literally meaning stand up, this song is telling us that we can’t remain in 1 place but we need to always be in motion. Spirituality doesn’t stand still. I am out of breath just listening to this song!

I Just Wana Be Me (Nili Me Li)- In actuality can anyone be someone other than themselves? It truth though, plenty of people are expected to be what they really aren’t! Thankfully for all of us music lovers, Eli has found himself and his music shows!

In conclusion, I know this isn’t the comprehensive review I usually write but an album like this doesn’t need so many words written about it and I feel the more I write the more I take away from its brilliance. I totally recommend this album! It is available online at http://www.mostlymusic.com/hearts-mind.html and wherever quality Jewish Music is sold!