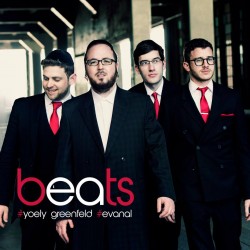 Compilation/Wedding CDs are produced from time to time and while I enjoy hearing the most popular songs with a particular band or arranger’s twist, I have never felt compelled to write a review on one before. My view on the subject has changed with the recent release of Beats by EvanAl Orchestra featuring vocalist Yoely Greenfeld. I have reviewed both of Yoely’s albums and have written before about how much I love his voice so I will focus a little on EvanAl. I have truthfully never heard them play live but I have seen a number of their videos and have heard from plenty of people about them. I once had the pleasure to spend a Shabbos with their original drummer Shabsi Broyde and got a good perspective of where the band has come from. Now for better or worse, the style on the east coast for years has been booking agencies that put together immensely talented musicians who might or might not have played together before. You could see the same name on a band stand 5 nights in a row and see completely different guys and at the same time see the same guys 5 nights in a row with different names on the band stands each night! In the past few years with competition upping the game, there are some bands that have a core of the same musicians each and every night and their signed is not only much defined but also tight and even more enjoyable. EvanAl is one of those bands that fits in this category, but I have to back track. They started as the quintessential boy band. Bochurim in Yeshiva who enjoy jamming together, play at their Yeshiva’s functions, take a few bar mitzvahs to have some fun….and it evolved from there. The name EvanAl literally means “rock on” and this is exactly what they did. When they started to get popular they started playing weddings and perfecting their sound. Together with their manager, Chaim Rosenblatt, Eli Lax (on guitar), Mutti Weiss (on keyboards) and drummer extraordinaire Yaacov Friedman, they have come a long way and have matched their popularity with top quality sound, arrangements and talent. On Beats they teamed with Yoely and his producer Naftali Schnitzler to come out with a very enjoyable and foot tapping album! Since this album has 54 songs on it, I won’t be reviewing each one separately but will go medley by medley and pick out some of what I loved about it.

Freilach Set- This starts with an EvanAl classic intro and goes right into the new popular Od Yeshama that has been attributed to Arele Samet. Most of the songs in this set are not the typical songs that I have heard by weddings but it’s a nice mix and a nice variation to hear. It is mostly old songs, featuring MBD’s Tov Lehodos, (yes I am skipping some songs on the medley….love em all….just pointing out the ones that made the most impact on me) V’elokim (really a Boruch Kayl Elyon…as featured in the Journeys song Sfashkenaz), and Torahso by Tzaly Gold (wow it’s a good song…not sure how it slipped through the cracks). I especially enjoy the musical and vocal arrangements on V’elokim. The medley ends with the timeless Od Yeshoma by R’ Shlomo Carlbach…when it finally ends…oh and I love Yaacov’s drum “roll” at the end!

Disco Set- This pumping medley starts with Yoely slowly singing the popular Gad Elbaz song Hashem Melech (yeah I know he lifted it from the Non Jewish music world) and it quickly “techno”izes. Eventually the song is played with regular instruments as it would at a wedding playing the disco horas. I know that EvanAl has their own in house DJ and has incorporated him into their regular gigs so this format makes sense. This features many of the recent hit discos including Chosson Domeh (seems to be more popular in Eretz Yisroel but is making its way over to the US), Yoely’s Neshimu, Yeedle’s M’layim Ziv, Lo Yaavod (A collaboration of Metalish and Yaakov Shwekey), and the hit single of Yumi Lowy, Mi Adir. Also featured is a blast from the past, Oseh Shalomwhich was composed by Yitzy Bald and recorded by Ira Heller (who is BH alive and well….and he should be gebencht with arichus yomim) and the Gummy Bear song adapted by AKA Pella as Asher Boro. The medley ends with an interesting “EvanAl 2014” riff. All in all this is well arranged and enjoyable to listen to.

Israeli Rock Set- The guitar heavy intro is a good start to this lebedik rock medley. Since most of the songs on this medley are by American artists, my guess is that the name “Israeli Rock Set” is because this is the style of the “freilich set” in Israel. No matter the name, this is a very enjoyable medley featuring some newer songs (for example Yoely’s Habotchim, Tzaly Gold’s Ivdu, and Rabi Nachman by Itzik Eshel), some older songs (for example Avraham Fried’s Keitzad, MBD’s Tomid B’Simcha, and R’ Shlomo Carlebach’s old niggun that was adapted by Meydad Taasa with the words Ma Shehaya) and some recently discovered/released Chassidish hits (for example V’yiten B’fi and a Breslover Niggun called on this album Rabeinu Shu’ag). The choir led by Moshy Kraus does some really nice work on the album and on this medley in particular. For me the highlight of this album is when they slow down and then go into a disco beat on Rabeinu Shu’ag.

Heibtzach Set- this is another disco/horah medley featuring some of the popular horahs that are played at weddings today. I am not going to list all the songs in this medley, however I love how MBD’s Shalom Aleichem (from his last release, Kissufim) intros into Benny Friedman’s hit Shalom Aleichem. One interesting but not surprising thing about this album is how they mix in many of Yoely’s songs. Most of them have not become wedding circuit famous but are really nice songs and it’s nice to hear them again. Tantz in this medley is one of those songs. Tzaly Gold’s Velo Neivosh is another one of those songs that might not be as famous but is also an awesome song. Yesh Batorah, originally featured on the Dischu Siyum Hashas album is yet a 3rd under the radar gem featured on this album. The medley ends (sort of) with Beri Weber’s mega hit Oi Tatte with the choir singing even after the music ends….just like bochurim will do at a wedding! I said the medley only sort of ends because there is also a little comedic relief with the Penguin Dance. If you never heard or saw it…google it for a good laugh!

World Set- This medley is a mixture of Sephardi, Israeli and just regular popular Jewish songs. The medley switches between horah, disco and techno beats. Besides Yoely, this medley features guest singers Avi Peretz (on Itzik Eshel’s Eiza Kif), keyboardist Mutti Weiss (yes it’s him singing) on Ari Goldwag’s Am Echod, and Michoel Schnitzler (singing in a digitally enhanced baritone voice) on Yehuda!’s classic Yesh Sachar. All in all this is a very enjoyable and fun medley.

Rock Set- The send off of an amazingly enjoyable album is this fun filled medley. Starting with Dovid Gabay’s Tamshich (I remember when it came out and just loving the intro on it), Michoel Streicher’s Tipol (yes I know the cover says it’s Dedi’s…but Streicher released it way before Dedi) and Shauly Waldner’s Siman Tov the guitar riffs are off the charts. Mendy Gerufi’s Keitzad Merakdimm Itzak Eshel’s Im Ein Ani (with Eli Lax and Velvee Feldman adding original lyrics), and Avraham Fried’s Kach Es Sheli (with an awesome drum and guitar intro and EvanAl’s signature timing on the song…) brings us to the finale of the medley….Yoely’s Im Eshkucheich!

In conclusion, this is a very enjoyable album to have both because of Yoely Greenfeld’s voice, and EvanAl’s music! If you haven’t bought it yet (and they have sold out their 1st 2 printing already) what are you waiting for! It is available online at http://tinyurl.com/n75s2o3 or wherever good Jewish Music is sold!