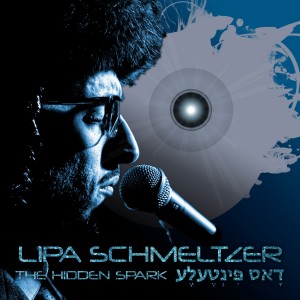 Lipa Schmeltzer is a trend setter. There is really no other way to say it. His musical talents and prowess are virtually unmatched and his energy is legendary. I happen to remember him from a wedding in Chicago back before he was the famous singer and was there as a friend of the chosson and also the badchen for the mitzvah tantz. He performed the techyas hameysim dance with real live birds. Yes I am not exaggerating, real live birds that were flying around the hall after he released them. That was Lipa 14 years ago and he hasn’t stopped innovating or evolving as one of the most sought after and exciting performers in Jewish music today. The album, Dus Pintele, is no different. Lipa has a wide array of people collaborating with him however his fingerprints are all over the album. He is the producer, along with Naftali Schnitzler, composer of all the songs, writer of the yiddish and english lyrics, and also the arranger of the choirs. The album encompasses the full gamut of styles in Jewish music today and is in my opinion, Lipa’s most complete album to date. I appreciate how Lipa is not taking all the credit and thanks everyone who has helped him on his musical journey for the past 15 years. Without any further ado, here are my song by song assessments:

Nodeh L’Shimcha- I am going to be honest that when I first heard this song I did not like it at all. It was techno style, which as you all know is still growing on me but not my favorite style, and it just didn’t hit me right away as an enjoyable song. But then I saw a YouTube video of it being sung at a wedding and without even realizing it was the same song thought to myself how nice of a song it was and how this might be the next big hit horah! When I listened to this album again and realized it was the same song…walla…I love it! Arranged by Naftali Schnitzler, it is a real lebedik song and I can listen to it on repeat over and over (of course I don’t but that’s only because I want to hear the rest of the album too!)

Angel- This is more of a typical “Lipa’ style song. It is a mix of a disco, oompah and swing and there are words from a possuk in Mishpatim and also English words written by Lipa. The song is arranged by Naftali Schnitzler and he does a very nice job stylistically mixing the different genres.

Kaf Al Kaf- This is an ivrit song, with the lyrics written by Lipa and Eli Klein, who also arranges the song and featuring a special guest appearance by the Israeli children’s group The Kinderlach. This is a fun sounding techno song that talks about putting our differences aside and living together in harmony. Lipa is a big proponent of shalom and it is a theme of a number of his songs on this album.

Yegia Kapecha- This is a beautiful balled that is extremely heartfelt, eidel, and sweet. Lipa has a number of songs like this over the years so this fits well with his style.

Adon Kol Hasimcha- This is a lebedik rock “Lipa style” song. Yes I know, I have mentioned that a few times about different style songs, but that’s my point! Lipa does have many styles and excels at singing all of them! I have an extreme appreciation for the crisp horn lines in this song that have an Israeli sound to them…and what do you know, the song is arranged by Israeli arranger, Ruvi Banet!

Dus Pintele Yid- The title track of the album, this is a song with deep and heartfelt meaning. Since Yiddish isn’t a language that I understand well I can’t go into detail on the actual lyrics but judging from what Lipa writes in his intro to the song, this is a song that defines Lipa’s personal journey. The musical arrangements by Naftali Schnitzler really do justice to this hauntingly beautiful and somber ballad.

Ohev Shalom- This is another potential hit disco horah that Lipa has on this album. The words of the song follow the theme of the album to bring shalom to the world and bring people closer to yiddishkeit and the Torah.

Ata Kidashta- This is another beautiful hartzige ballad on this album. The first few times listening to the album I kept thinking by each song that it was the nicest song on the album only to be blown away by the next one! Ruvy Banet’s arrangements on this song are top notch.

Where Is Your Beard- When I first heard there was such a song on the album I was thinking to myself “come on, you have got to be kidding me!” But no, it’s true and this techno song happens to be a serious song that once again explores Lipa’s journey in life. In Lipa’s words: “This song is both complicated and self-explanatory. It relays a profound message about not judging people based on their exteriors, but solely on their hearts. Is it all about the beard or about the person beneath it? These tongue twisting lyrics will surely leave you humming.”

I’m With You- This song is personally dedicated to Lipa’s wife and the feelings which Lipa performs this song are felt very strongly throughout the song. Mixing words from Yeshaya with English and Yiddish lyrics, this hartizige ballad is sweet and melodious.

Higia Zman Hageula- This is a Lipa styled upbeat song that is going to get you up and moving when you hear it (or at least your fingers tapping along).  This is the one song on the album arranged by Shua Fried and I like the job he does with it. After hearing Lipa’s quiet side on the last song, hearing his unmatched energy on this song is equally enjoyable. This song ended way too quickly for me.

Venikdashti- This is another one of the beautiful hartzige songs on this album. As I have mentioned earlier, Lipa definitely has a number of styles that he is known for, but one that I think is underrated is his talent to compose such sweet and meaningful songs. Since I am running out of adjectives I will quote what Lipa has to write about the song: “When people hear this song, they think about purity. Every one of us has something different to improve upon, be it loshon hara, dishonesty, an evil addiction, inclination or impulse. These lyrics are about withstanding that nisayon. On a personal level, this track continually gives me strength and encouragement to grow in Ruchniyus. I hope it will do the same for you.”

Vehaya Beacharis Hayamin- The intro for this song is a piano solo…which is not something that is done often. It is beautiful! This song is an oompah that builds up as the song goes on. This is an amazing song and a perfect way to end off the album.

In conclusion, if you haven’t bought this album, what are you waiting for? It is available at http://www.mostlymusic.com/dus-pintele-the-hiddle-spark.html or wherever good Jewish music is sold!