Shimon’s Review of B’nei Heichala: A Shabbos with Benny Friedman 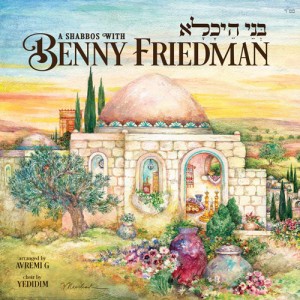 You know an album is good when it remains in MostlyMusic.com’s “New Releases” department for a full year after its release.  So it was with Benny Friedman’s Yesh Tikvah, the most popular new Jewish album in ages.  Not since Avraham Fried’s Chazak or MBD’s Ma’aminim has an album or a song retained its place in the popular consciousness for so long.

Enter Benny Friedman’s newest musical venture, B’nei Heichala.  This album is not the inevitable follow-up to Yesh Tikvah–that will come later.  Instead, B’nei Heichala follows on the footsteps of Nagila V’nismicha, the wedding album which was released in the spring of 2011.  B’nei Heichala is a collection of 30 Shabbos songs, ranging from super-old-school to relatively modern, taking us from Erev Shabbos to Havdalah.

B’nei Heichala, like Nagila V’nismicha, was arranged by Avremi G, and there are obvious similarities in sound between the two albums.  On this album, Benny is accompanied by a full orchestral arrangement, including a string section headlined by Stanislav Nikolov and a full brass and woodwind section (including an oboe!) and the one and only Shlomi Cohen on saxophones.

Track 1, “Joy Is in the Air!” (Erev Shabbos): My first impression while listening to B’nei Heichala was that I was back in Gan Israel Day Camp in Collegeville, PA, and a big reason for that was this track.  It begins with R’ Yom Tov Ehrlich’s classic “Shabbos Kodesh” translated into English, followed by “I Used to Think My Mother Was the Shabbos Queen”, Chabad’s “Shabbos Angels” (with the intro to “Just One Shabbos” snuck in for good measure), and Journeys’ “It’s Time to Say ‘Good Shabbos'”.  In my opinion, this rearrangement of Abie Rotenberg’s classic ranks above the Lev Tahor IV version, but nothing matches the original.

Track 2, “Gut Shabbos”: This upbeat song, one of the only standalone songs on the album, came as a pleasant surprise to my wife, who is anti-dirge, a common pitfall of Shabbos songs.  The song, originally from the album Ima Tagidi Li (and composed by Miriam Israeli, the lyricist behind “Yesh Tikvah”), switches between Ivrit and Yiddish, and the soprano sax solo from Shlomi Cohen starts the track off nicely.

Track 3, “Welcoming the Queen” (Friday night davening): This track is a trio of Lecha Dodi songs: one from old-school Tzlil V’zemer, a “traditional” version (which doesn’t sound very traditional), and a Yerachmiel/Aaron Razel composition, capped off with Michoel Streicher’s “Raza D’shabbos” (that would be what chassidim say instead of Bameh Madlikin, for all you Nusach Ashkenaz-types), a slow waltz.

Track 4, “My Soul Wants to Sing” (Friday night seudah): After sneaking in one line from Yesh Tikvah‘s “Shalom Aleichem” (of course), Benny treats us to two classic versions of “Eishes Chayil”: one Bobover version and one from Martin Davidson of Rechnitzer Rejects fame.  He then moves on to two Chabad versions of “Azamer B’Shvachin”, the second of which (the freilach version) I’ve actually heard before–though for the life of me I can’t remember where.

Track 5, “A Night of Peace and Joy” (Friday night zemiros): This track starts off with a very well-done remix of Ari Goldwag’s “Kah Ribon” (has anyone else noticed a lot of collaboration between these two recently?).  Benny then segues into the version of “Yom Zeh L’Yisrael” which always drove me crazy when someone tried to sing it at the Shabbos table, but Benny Friedman can pull it off without it sounding dorky.  Next comes one of my favorite zemiros of all time: Miami Boys Choir’s “Menucha V’simcha” from Klal Yisroel Together, released in 1987.  This rendition has a more funky arrangement than the Yerachmiel Begun/Yisroel Lamm classic, but still does the original justice.  The track ends off with a disco: Avraham Fried’s “Me’ein Olam Haba”, from 1983’s Forever One (does anyone get the sense that these two are related?).

Track 6, “Singing with the Angels” (Shacharis and Musaf for Shabbos): This track’s arrangement really allows the orchestra to show itself and remind us how rarely we are treated to full orchestras in modern Jewish music.  The first song on the track is David Werdyger’s Hu Elokeinu, and you can really hear the flute, clarinet, and oboe shining through.  The second song is the Meilitzer Rebbe’s “Mimkom’cha”, which, where I come from, is more commonly sung as “Kol Mekadesh Shevii” on Friday night.  Benny then transitions into a Vizhnitzer version of “Kevodo”, before launching into the classic Chabad version of “Hu Elokeinu”, which anyone who has ever davened at a Lubavitcher shul has heard before.

Track 7, “Hashem Truly Loves Us” (Shabbos day zemiros): This track combines some of the most classic zemiros ever (assuming we stretch the definition of “zemiros” a bit) into one great track.  First up is “Chukoseha”, composed by Yossi Green and first heard on MBD’s album Moshiach (and more recently on Yossi Green’s Hartzig with Shloime Daskal), a song which, in my opinion, has always been underrated.  Then comes a classic trio: the Sefardi “D’ror Yikra” and “Ki Eshmera Shabbat” and that “Yom Zeh Mechubad” which has a tendency to confuse yeshiva guys as to which version of the refrain is melody and which one is harmony (spoiler alert: Benny gets it right).  Next, executive producer Mendy Werdyger gets a nod of recognition with a rendition of his 1990 disco “Zeh Ha’ois” (also composed by Yossi Green) from the album Chaverim.  Finally, the track ends off with Camp S’dei Chemed’s all-time classic “Baruch Keil Elyon”.

Track 8, “Children of the Palace” (Shalosh Seudos): This track is the title song, “B’nei Heichala”, a beautiful Chabad niggun.  This song is blatantly, unapologetically chasiddish, and that’s not a bad thing.

Track 9, “Echoes of a Holy Day” (Motzaei Shabbos): This track starts off with “Shabbos is Going Away”, originally made famous on Uncle Moishy Volume I.  It then transitions into the Breslover “B’motzaei Yom Menucha” very creatively: the recording first sounds like it was recorded at an actual kumzitz (actual off-key singing and everything), and then the music gets gradually mixed in, until the heavy drums and distortion guitar kick in and give us a very solid ending.

In summary, Benny Friedman has put together a very solid Shabbos album.  It’s not for everybody: There is zero Carlebach, a lot of really old-school niggunim, and a definite chassidishe tilt in the song selection.  If you were waiting for the next Yesh Tikvah, keep waiting (or maybe check out Ari Goldwag’s Am Echad), but if you love Benny, you will love B’nei Heichala.